Woke up and had breakfast at the hotel.  During breakfast Amy & Kevin gave us a goodie bag full of fun Disney stuff!  Included was a pair of sunglasses which will become important later.  After breakfast we loaded up the cars and set off for the Port of Miami.  Should have only taken us about 40 minutes.  Well….we got lost and Nigel (my British Siri) was beside himself with all his recalculating!  Miami roads are not the easiest to navigate. We finally made it and parked and lugged our bags to the looooong line.  They assign you port arrival times but apparently in Miami, anything goes!  We got to the port at 11:10 am and it took until 12:45 pm to get through the lines and on the ship!  That’s nuts.  Usually, in Port Canaveral, it’s a 30 minute or less process.

Hot and hungry we went to Carioca’s to the lunch buffet.  I’m not a huge fan of buffets but Disney puts out a good one. CSP especially enjoys the big crab claws and peel and eat shrimp.  After lunch our rooms were ready so we headed to 5505 to drop off our bags.  Our luggage arrived soon after!  That was quick!  We had a cool sideways room. 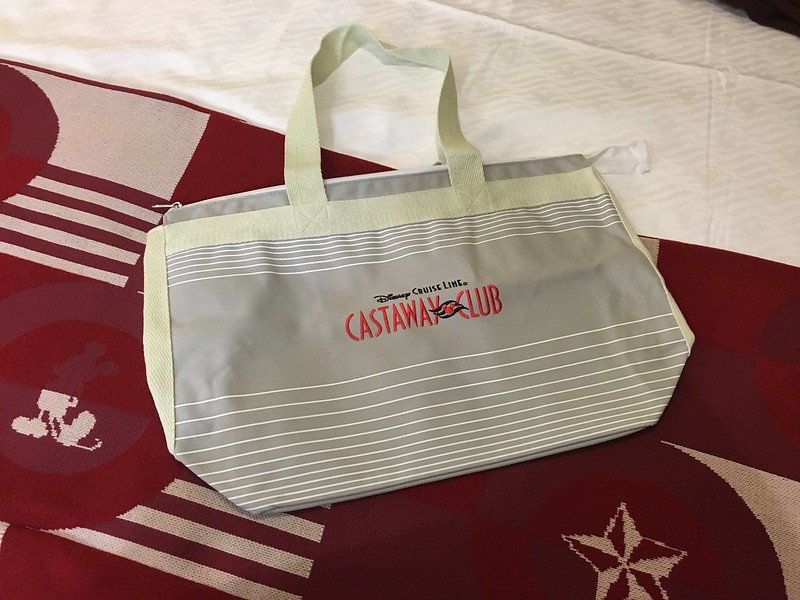 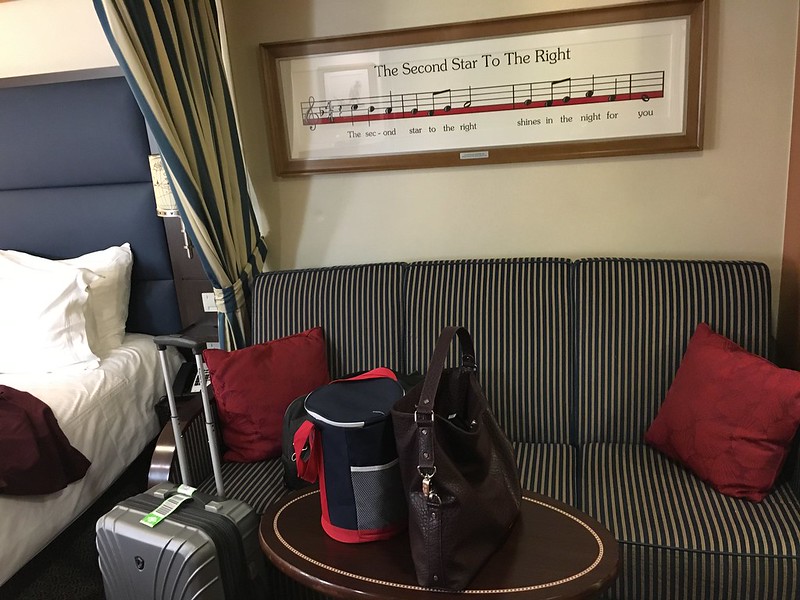 It felt bigger than the standard room 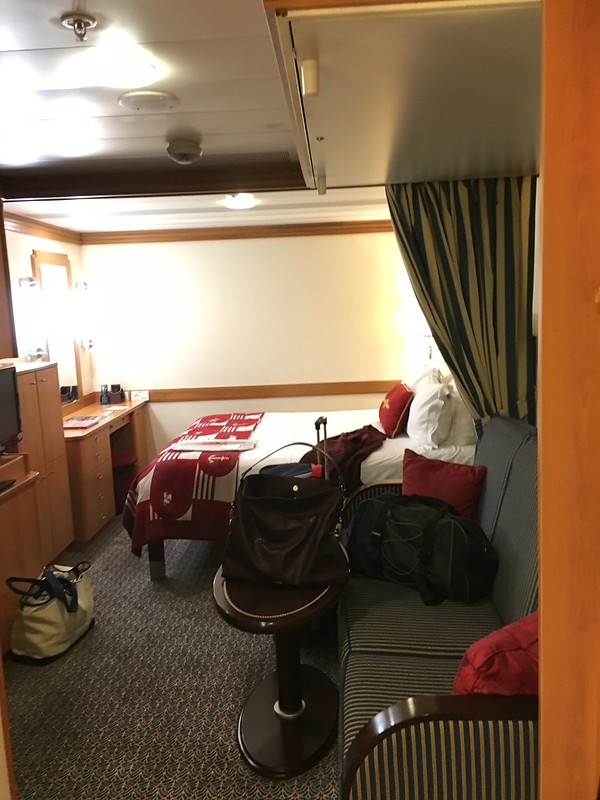 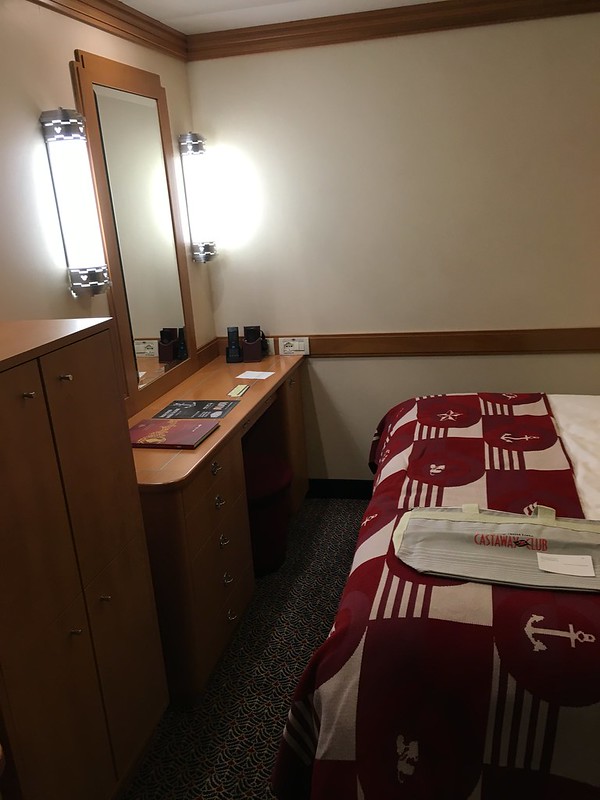 and we really didn’t miss the balcony for the 4 nights we were on the ship!  Next thing we knew it was time for the dreaded muster drill. OMG people were still getting on the ship while we were doing the drill, which just prolonged the drill and it was so hot out there in the Miami sun!  When the drill was finally over we went up on deck to watch the sail away party.  It rained a little bit but the view of the Miami skyline was spectacular. 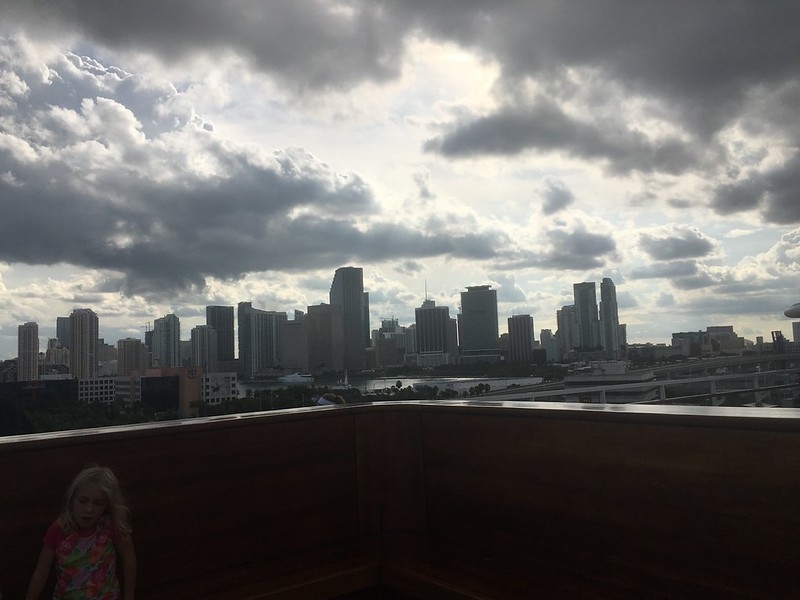 It amazes me how they build giant buildings RIGHT next to the water!

After the sail away party we went to O’Gill’s the Irish pub for a little while to cool down. 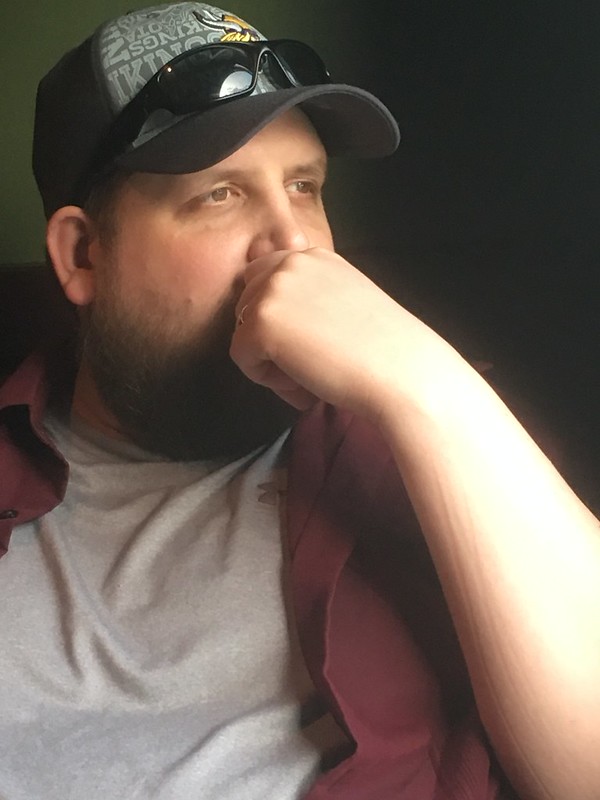 Nuna from Thailand was there!  She worked there in February when we were on the Magic and she recognized us!  We enjoyed a pre-dinner cocktail (beer for CSP, coconut mojito for me) then went back to the room to dress for dinner. 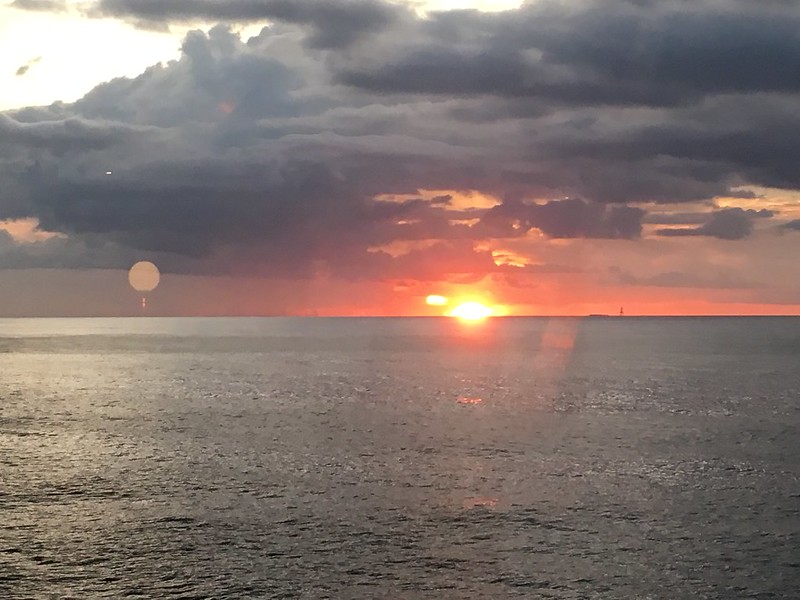 Dinner tonight was in Lumiere’s 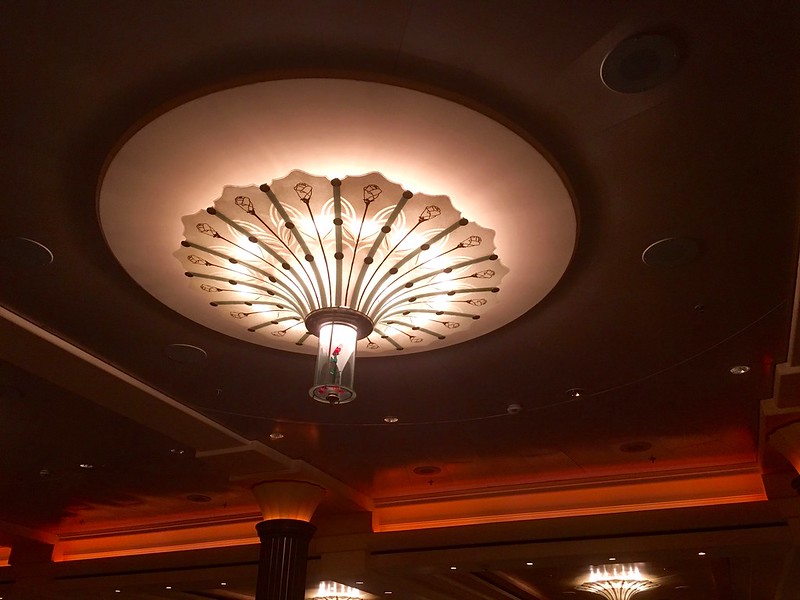 and was French themed, which made CSP very happy as that meant escargot! 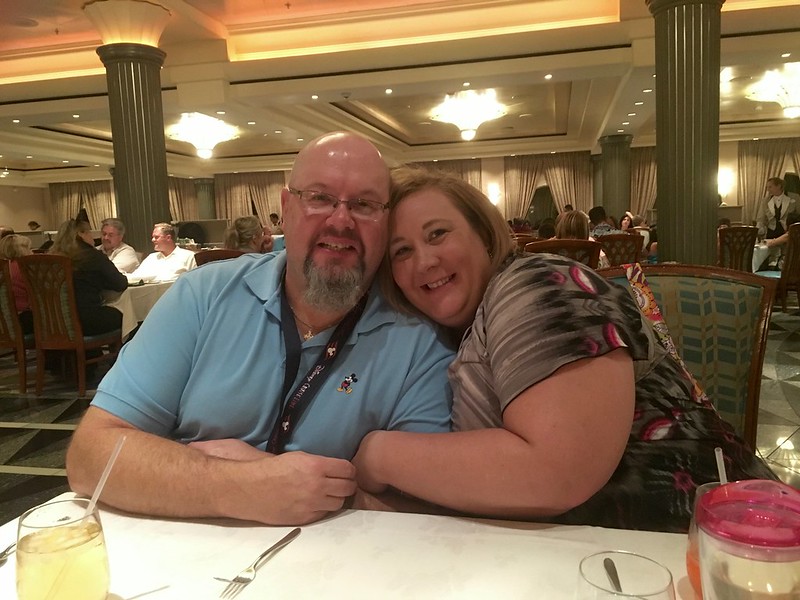 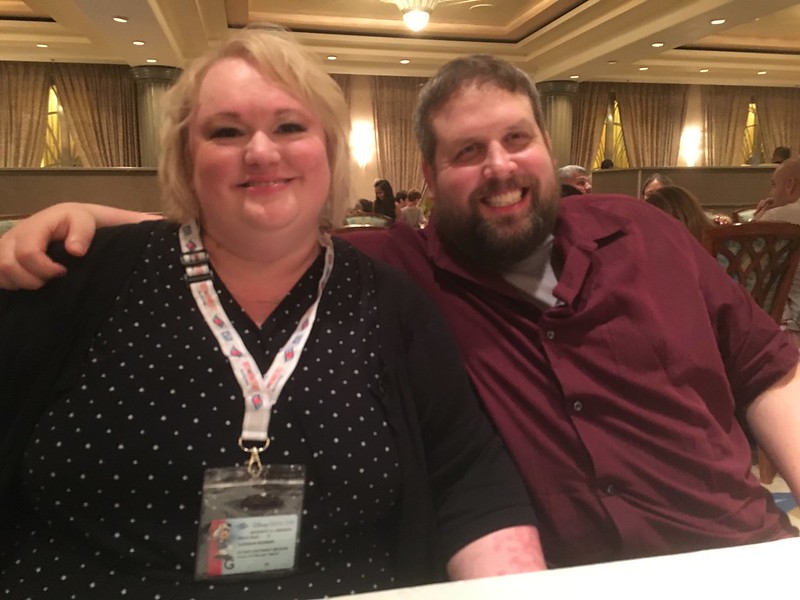 After dinner we stopped into the onboard shops for a bit then went to Fathoms lounge for Match Your Mate.  Amy and Kevin had never seen this show and I knew they’d love it.  It’s like the Newlywed Game but there’s a newlywed couple, a couple who’s been married forever, and a couple chosen by the crowd via dance off! Amy & Kevin got up and joined the dance off! 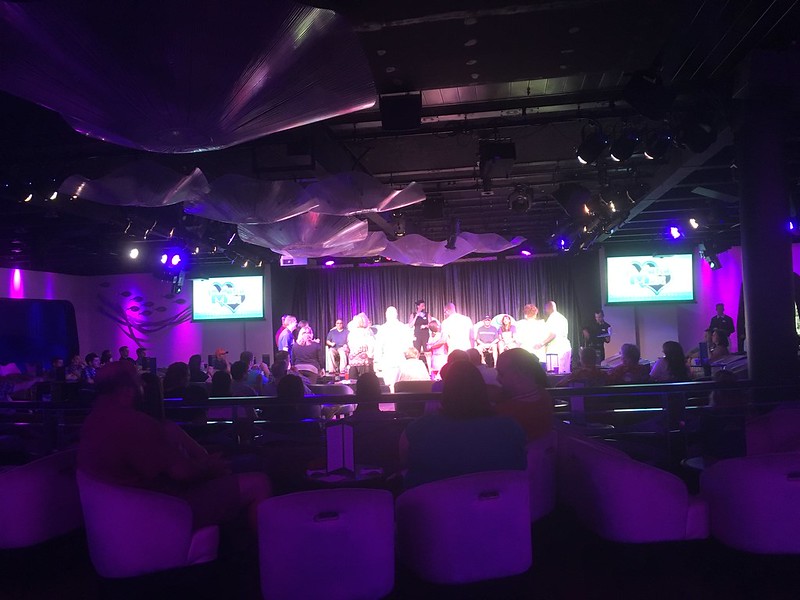 They were awesome and we cheered as loud as possible but alas, they weren’t chosen. 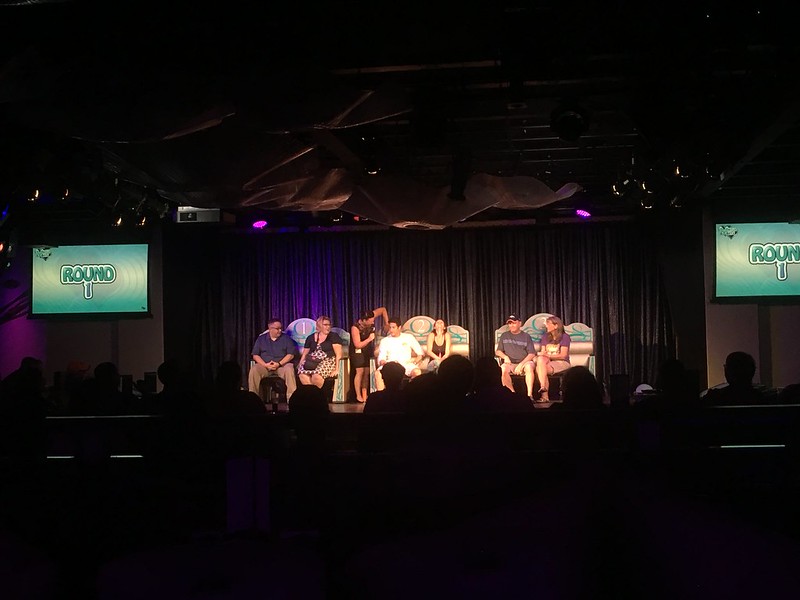 Couple #1 had the funniest answer of the night when he was asked “What would your wife say is her favorite part of YOUR body?”. The man said “My nips!”  As in his nipples!!!  I died!  He said she likes to flick them!  Oh my, he was known as “Nips” for the rest of the cruise!   The whole show was hilarious and a great end to the day.  We went back to our room for bed when it ended. 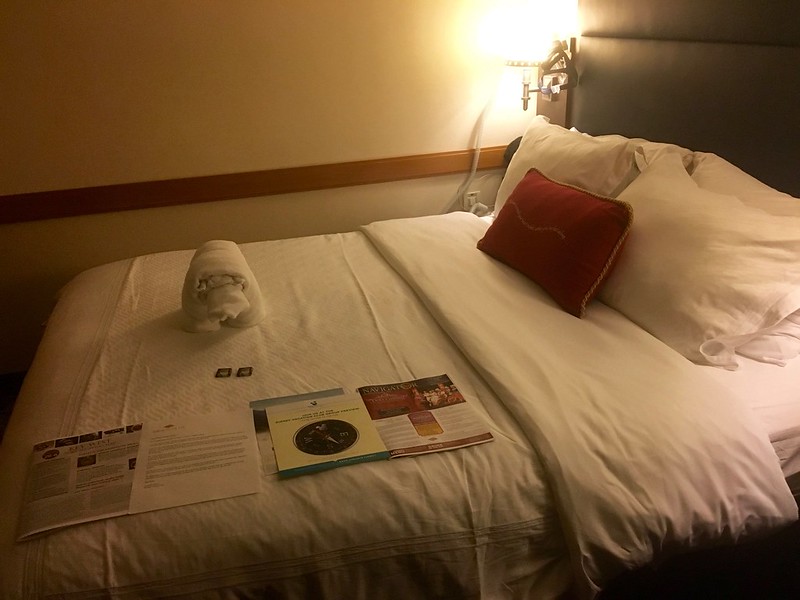 Note- Hurricane Joaquin affected our itinerary.  As of dinner we still didn’t know for sure where we’d end up stopping!  We were supposed to go to Disney’s Castaway Cay island, then Nassau, then Key West.  Tune in next time to find out where we stopped first!