Ever since I saw Monsters Vs Aliens I’ve been thinking about how to get hair like Ginormica.  Now, it might seem odd that my hair inspiration is a cartoon, so technically I suppose her hair color isn’t really found in nature.  But what nature can’t give you, you get from the salon!  Look how cool her hair is though!

And I did find some real life (sort of) examples.  The singer girl from Steel Magnolia has almost white hair.  SO cute!

And the new movie Sucker Punch has a white haired girl in it. 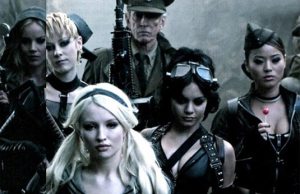 Now, I’m aware that I’m neither 50 feet tall nor a country music star or fictional head band wearing chick in what appears to be a leatherette army.  But I don’t really have anything to lose, so I may just go for the full on vanilla blonde at my next salon visit.  I’m a natural blonde anyway, so it won’t be much of a stretch.  Well, it wouldn’t have been 20 years ago.  But the older I get the darker it gets so the more chemically enhanced it gets.  Poor CSP is worried I’m going to come home looking like a cartoon character.   But hey, no risk- no reward!