Costa Maya Day!  Another port we’ve visited before, so we decided to enjoy the empty ship again today.  We woke up early and went to the buffet in Cabana’s for breakfast.  Costa Maya was pretty crowded with cruise ships today. 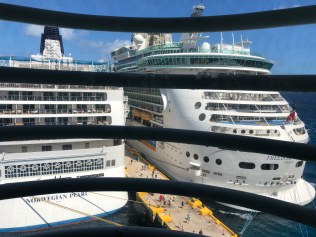 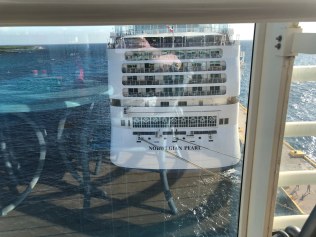 There was even a little ship wrecked on the shore. 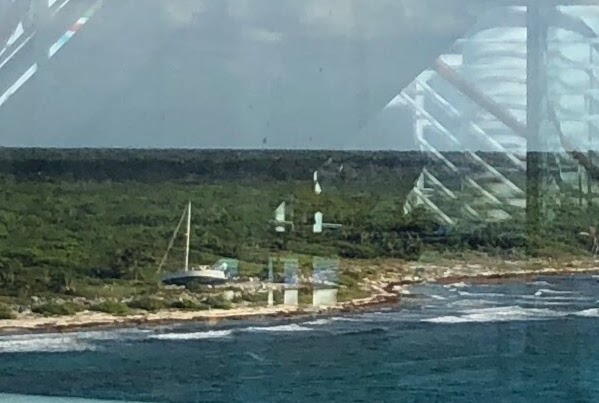 After breakfast we went back to our room to get ready for the day. 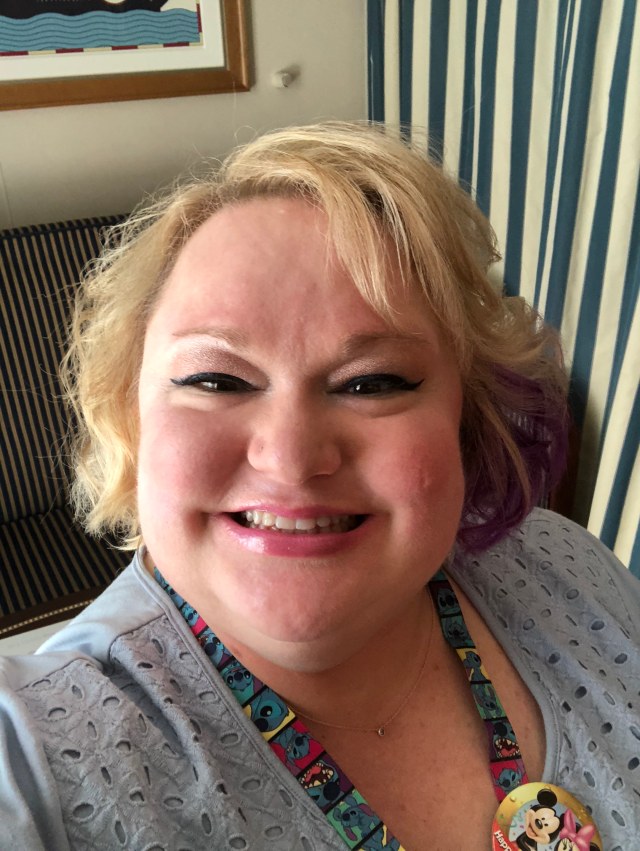 First on our agenda was another movie- Guardians of the Galaxy Vol. 2 It was so good! Baby Groot is the cutest thing!!!

After the movie we went up on the pool deck to grab a snack since we missed lunch.  I had a chicken shawarma which was really good.  Then we went back to our room to drop off the popcorn bucket and get ready for afternoon tea.

Our cruise group had an afternoon tea in the Cadillac Lounge. 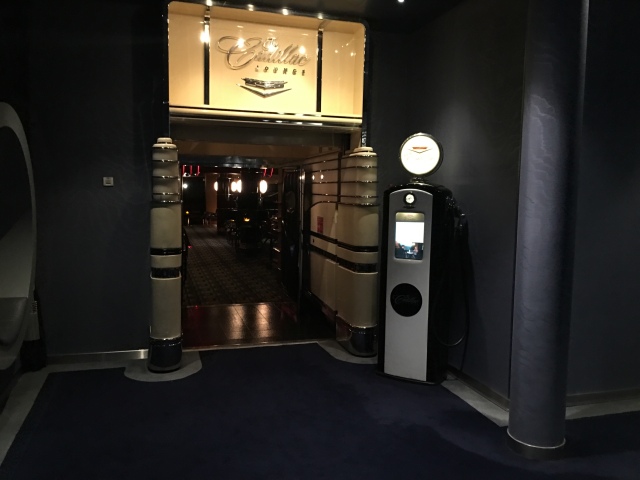 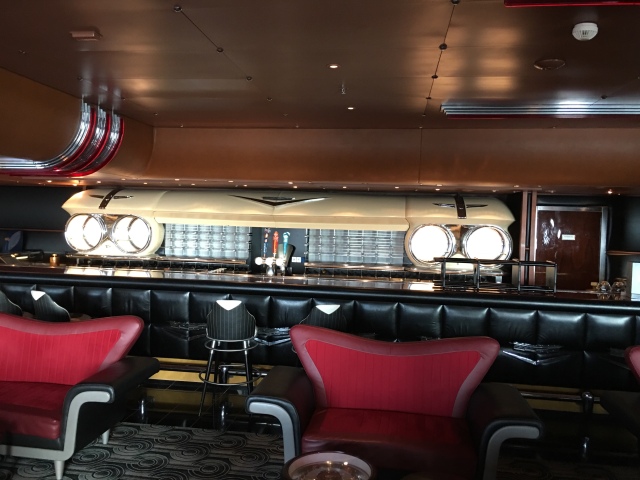 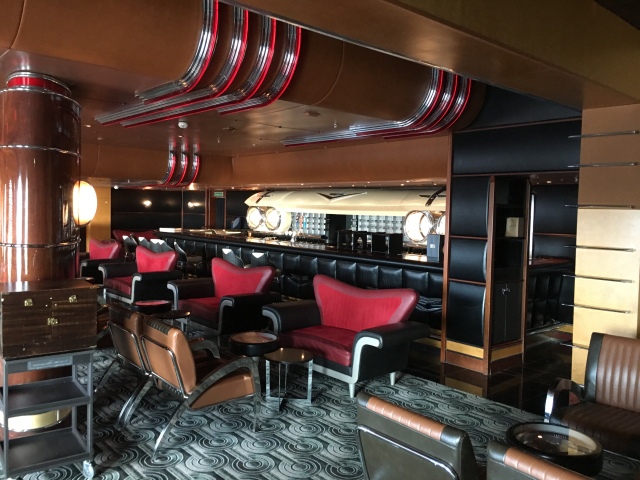 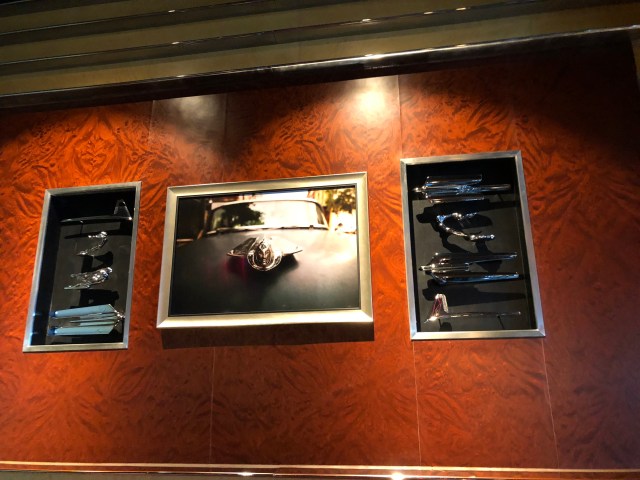 It was so nice!  Plus the Cadillac Lounge is very cool- great theming.  We arrived and got our goodies 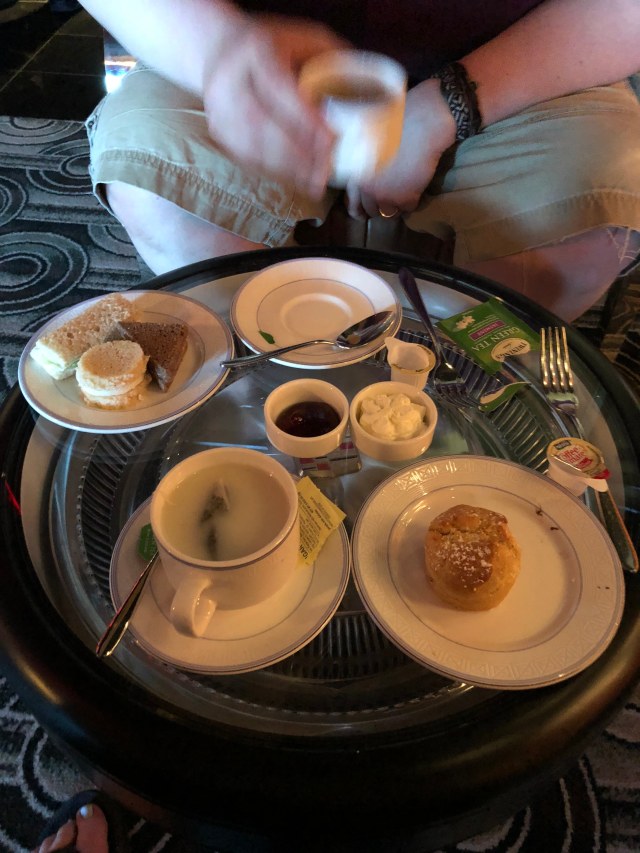 and then Laci and Rusty and their kids arrived and joined us.  It was the first time we were meeting Birthday Girl Keci and their son Kade. We all had a great time during the tea.  It was such a nice break during the day.  The Wonder had coffee, hot tea, iced tea, and so many little desserts and finger sandwiches.  I’m mad I didn’t get more pictures!

Once tea was over we rushed to the other end of the ship to the Buena Vista Theatre again to see Black Panther.  We were excited to see it because it had been sold out for so long at home! On the way to the theatre we walked right past Belle. 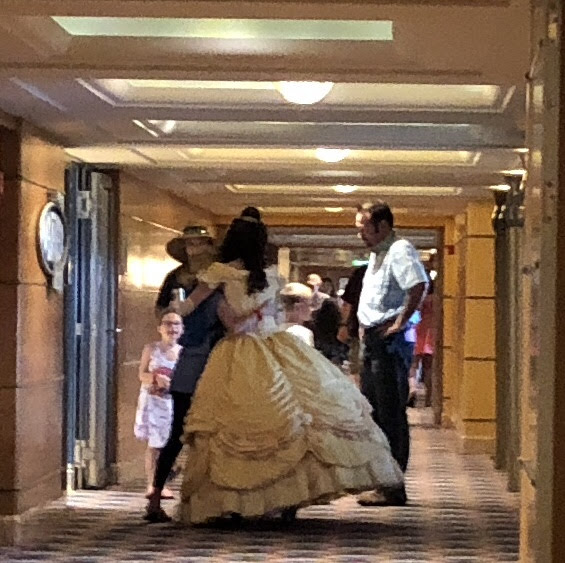 I went to the restroom before the movie and discovered this: 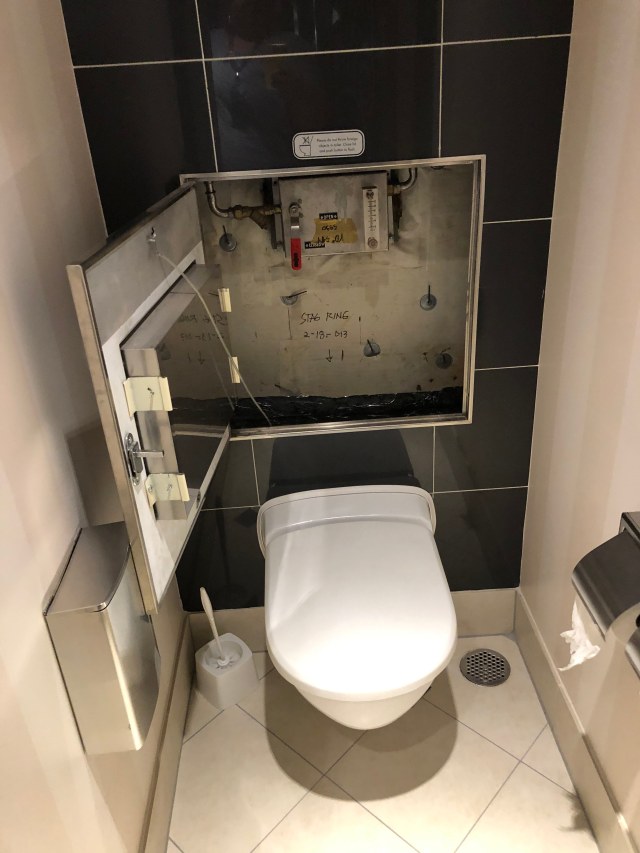 I had to take a picture for CSP.  He loves all the behind the scenes stuff! Speaking of restrooms, I don’t know how it is in the mens’ rooms but in the ladies’ there are fresh roses! 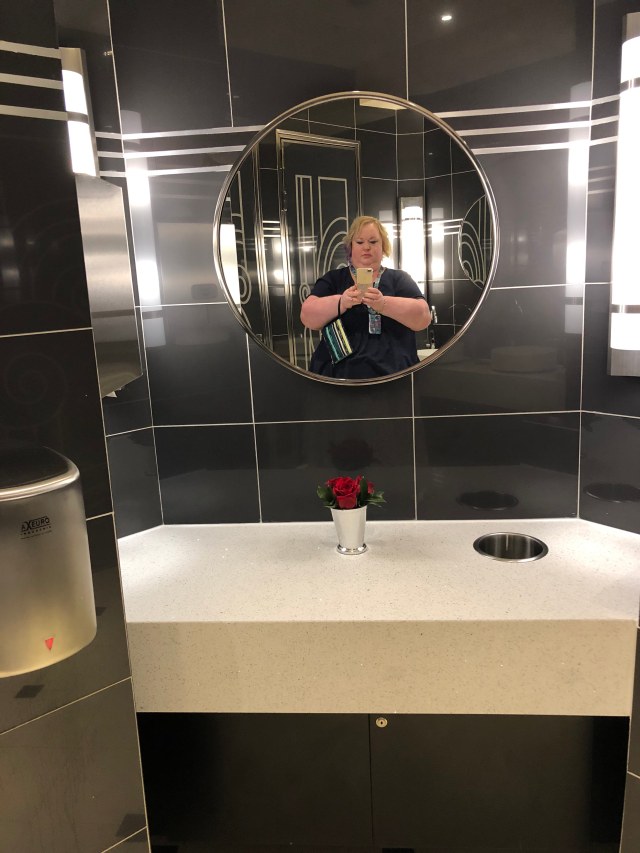 After the movie we had about 40 minutes before dinner so we went back to the Promenade Lounge for cocktails. I’m realizing as I’m writing these blog posts that it seems like we’re drinking all the time.  We’re really not big drinkers, especially at home.  But on the cruise I like to have a coconut mojito when I can and CSP takes part in the big beer mug program.  You pay something like $15 and get a big beer mug, then when you refill it they only charge you for a pint of beer instead of the full 22 ounces.  It’s a great deal.

Tonight’s dinner was at Tiana’s Place.  We were very excited as this was our first time there.  Again, the theming was spot on. 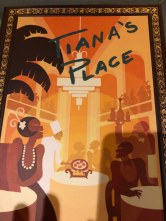 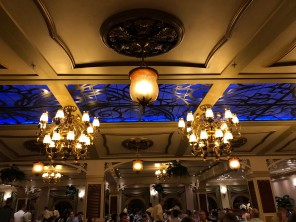 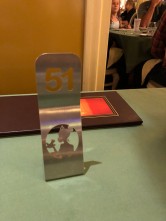 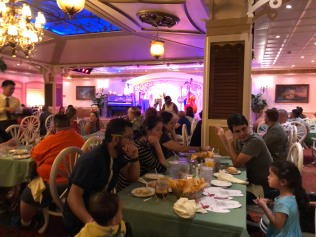 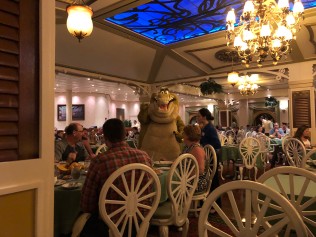 In the bottom right picture above you can see Louis came out to greet everyone with his trumpet! 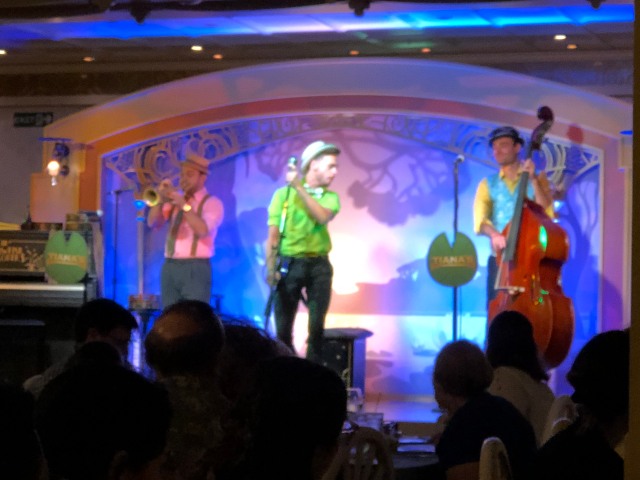 They have a live band playing during most of dinner.  They were good!  It was fun having the music.  All the kids got up and danced with Tiana.  Speaking of Tiana….she went around to each table tonight and greeted everyone! 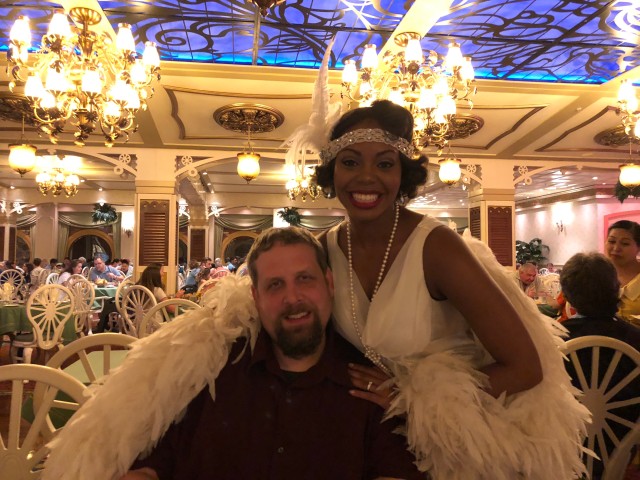 That woman has endless energy! To do this for 2 dinner services a night, plus all the singing and dancing!!!

Oh, and the food was really good too! Louisiana Cajun style. 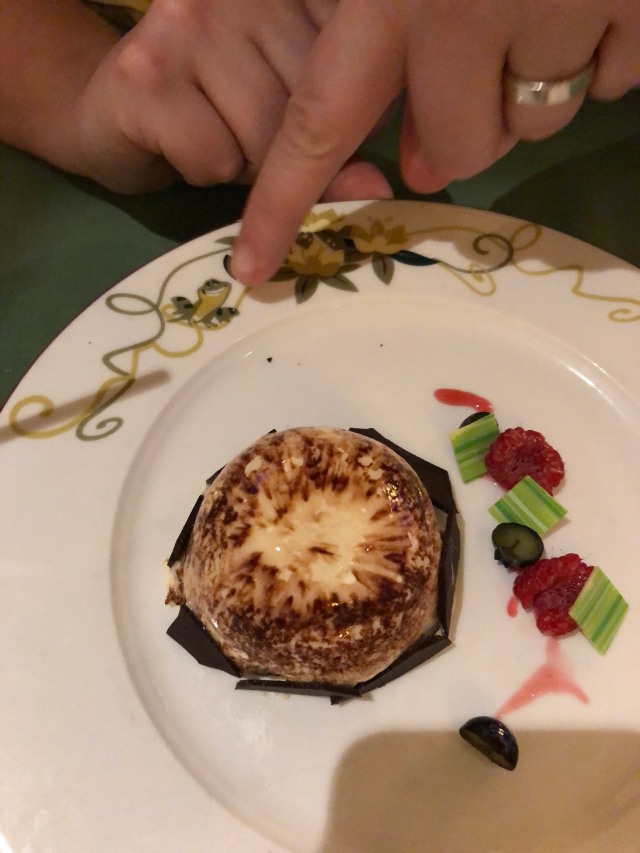 This is CSP’s tiramisu.  He liked the little frog on the plate.

After dinner we went up to bed. It was another great day!

I'm married to CSP (Cap'n Safety Pants) & mom to 1 pug & 1 pughuahua. I’m a list maker, a major planner, passionate, loud talking, and big laughing. I am a Medical Coder by day, and also an Independent Stylist with Color Street.