For Halloween this year I decided to take my obsession with sugar skulls and turn it into my costume!  I needed a costume because my sister & BIL hosted a FABULOUS Halloween party in conjunction with their across the street neighbor.  They’ve set the bar high!  Anyway, I didn’t want to spend any money on a costume so a Day of the Dead Sugar Skull was perfect!

I gave myself a couple hours to paint and I used every minute!  I started with a white base.

That took a long time to get the streaks and splotches out.  Then I moved on to eyes, nose, jaw.

I used Snazzaroo water based face paints.  I curled my hair before I started painting so it would set.  2 hours later- the results!

I wore all black clothes and pinned 2 Thirty One large rosette clips to a thin black headband.  To set my face paint I sprayed my face (and hair) with glitter hair spray!  I also wore a skull and crossbones necklace and large silver earrings.  Last but not least, sparkly lip gloss!

Then it was time to party!  The set up was awesome!  This is the candy table! 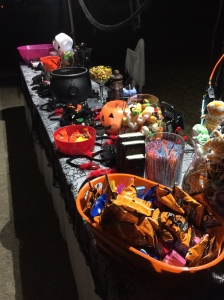 There were plenty of toys for kids with allergies too.

The tables were all decked out with black candelabras.  So cool!

Sara and Gigi looked so cute in their get ups! 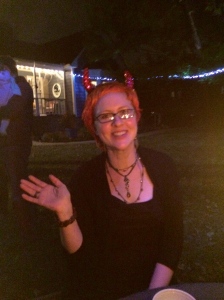 Joey was Shadow Man!  You couldn’t see that kid as soon as he stepped out of the light!

The party was in Sara’s front yard for dinner, then we were to move across the street to the neighbor’s house for dessert and an outdoor movie.  Brianna the neighbor even carved a theme pumpkin to match the movie- Hocus Pocus!  The pumpkin was amazing!!! 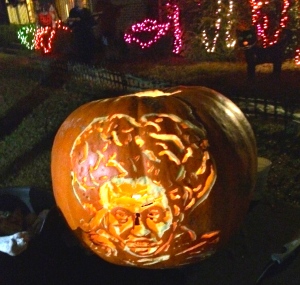 Alas, it was not meant to be.  We had just finished dinner and socializing when a storm came up!  We all dashed inside with the food and decorations.  CSP and I had to go home early anyway because he had to be at work at 5am today.

We had a ball though and we’re thinking this will turn into an annual thing!  I already have requests to do Gigi and Momo’s faces next year!