Sunday morning we woke up and got dressed for brunch at Palo. 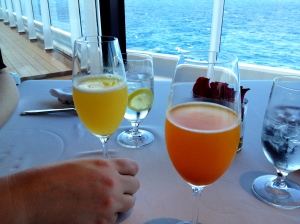 CSP had a mimosa and I had a bellini.  Our table had an awesome view.

Brunch at Palo is an amazing experience.  I couldn’t take pictures of the buffet because of all the people milling about loading their plates, so you’ll just have to take my word that it’s totally worth it!  An example of what you can choose from…CSP had shrimp, salmon, tuna & crab legs.  I had an almond croissant with marzipan.  OMG it was melt in your mouth good.  CSP had pasta with salmon and we shared a sun dried tomato and goat cheese pizza.  I had a cup of strawberry soup and eggs benedict. Well, egg benedict.  Just the one.  CSP had egg Julia (eggs benedict with salmon) and we shared some chicken parmesan.  I’m embarrassed at how much food we left on the plates but we just couldn’t eat it all, yet we wanted to try so much of it.  Oh, and then there was dessert- a mango panacotta for me with a chocolate covered strawberry.  It was all very tiny and cute.  CSP had chocolate mousse, a tiny tiramisu, and a wee peanut butter brownie.

After brunch we waddled under this gorgeous chandelier in Palo on our way to Meridian.

We stopped in Meridian to get CSP a cigar to smoke during the Super Bowl that night.

Meridian is a little bar between Palo and Remy where you can enjoy a cocktail or cigar.  The views from the bar are breathtaking.

Cigar in hand we headed back toward our stateroom.  We stopped for a moment at the Future Cruise Desk and booked next year’s cruise.  If you book while you’re onboard you get a 10% discount, the deposit is cut in half, and you get a stateroom credit.  We got $200 in credit.  Nice!

We went back to the cabin and changed clothes then walked around the upper decks a bit, just to check out the ship.  Then we went shopping in the onboard shops for a magnet (we always buy a magnet for each cruise), and presents for CSP’s mom for taking care of our pugs and house while we were gone.   Then it was nap time.

We woke up late and we had to rush to get to our Mixology class in time.  On the Navigator it said the class was just a half hour but it turned out to last from 3:30 to 5pm!  It was SO much fun!  It was in the Skyline Lounge.  Our bartender had us count off in 5s.  Then he called all the Ones up behind the bar.  One by one each group made a drink following our bartender’s instructions. He was from Northern England and had the best accent.  I think his name was Darin so let’s call him that.  The class was $15 each and we each got 5 drinks.  What a bargain!  Had we bought these drinks separately in a bar they would have been over $5 each!  I made a drink called High Tide- it’s a Disney drink.  Cranberry juice, pineapple juice, Malibu rum, and Amaretto.  SO yummy!  CSP made the very manly cosmo martini. 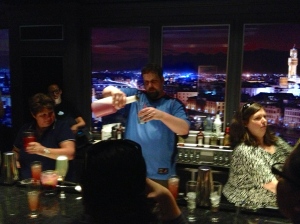 It was all so interesting too.  We learned all about the bartender tools and history of the drinks.  Sheila and Lamont from Match Your Mate were in there and we had a great time with them.  By the end I’d had 9 drinks (CSP doesn’t like liquor) and I was feeling good!

When class was over we went up to Deck 11, the pool deck, to scope out seats for the Super Bowl.

We scored awesome seats right by Donald’s pool in front of the big screen.  It was formal night that night so watching the Super Bowl meant we’d be missing our dress up dinner, but CSP was so excited about watching the game on the big screen that I couldn’t bear to make him miss it.  We sat down at 5 pm ish in what was apparently Ravens territory.  There were lots of Ravens fans around.  Some 49 fans but mostly Ravens fans.  It was fun to watch people on the AquaDuck 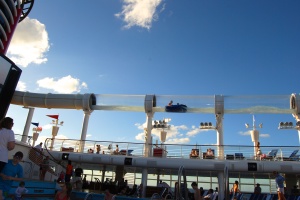 while we waited for the game to start.  An hour later the sun had set and the lights came on on the AquaDuck.

It really was neat to watch the game on the giant FunnelVision screen. 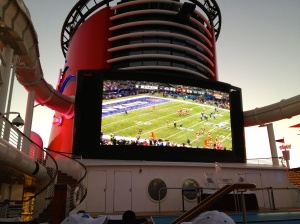 and once it got dark and everything lit up it was even cooler!

The only thing was we couldn’t see the regular Super Bowl commercials.  Just the same 6-8 ESPN commercials out of Puerto Rico.  I swear, if I ever see another Cricket commercial again it will be too soon!   Once the game started this sweet older couple from Baltimore sat down next to us.  She was decked out in Ravens earrings, socks, and sweatshirt. She was so sweet and told me in detail everything she had eaten since she got on the ship.  At one point during the game CSP leaned over to me and said “This is AWESOME!!!”  He also told me I was the best wife ever for not making him miss the game and dress up in a suit that night. Love that!

After the game we went back to our room.  Here are some pics of our stateroom. 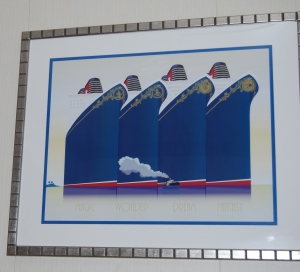 This picture of the 4 ships in the Disney Fleet hangs at the foot of the bed. 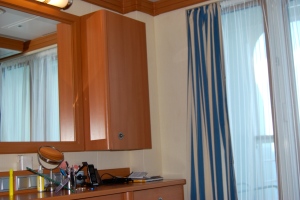 This is the vanity/desk area.  There’s lots of storage.  The cabinet with shelves up top, and 3 drawers below.  Big drawers too.

This is the other side of the vanity mirror.  2 shelves and the tv. 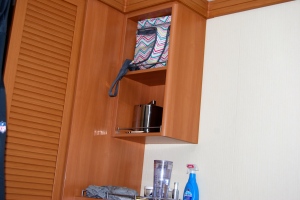 This set of shelves hangs over a set of 3 drawers.  In this picture you’ll notice at the top is the Organizing Pack from Thirty One.   I used it to carry my camera.  It’s a backpack and it was awesome.  Under that is the ice bucket.  On the top of the drawers you’ll notice a bottle of Downy Wrinkle Releaser.  If you don’t want to spend a bunch of time ironing on your cruise I recommend this product highly.  Beside it is my big Starbucks tumbler.  The cups provided at the beverage station on deck 11 are like tiny shot glasses.  But if you bring your own cup you can fill it up and quit running back and forth for drinks.   You still have to use their cups to fill up your cup for sanitary reasons.

This is the view of the bridge from our balcony.  You can see where normal verandahs stop on the level above ours and then how far out ours extends.

We love this room so much we booked the exact same room for next year just because of the balcony and the location of the room!  But mostly the balcony!

Our towel dinosaur.  So cute!

Next up….Grand Cayman and Stingray City!