Today was another sea day!  I like sea days because they give you time to enjoy the ship.  Today we woke up and showered and got ready for brunch at Palo.  Palo is on the back end of the ship with gorgeous views of the sea. 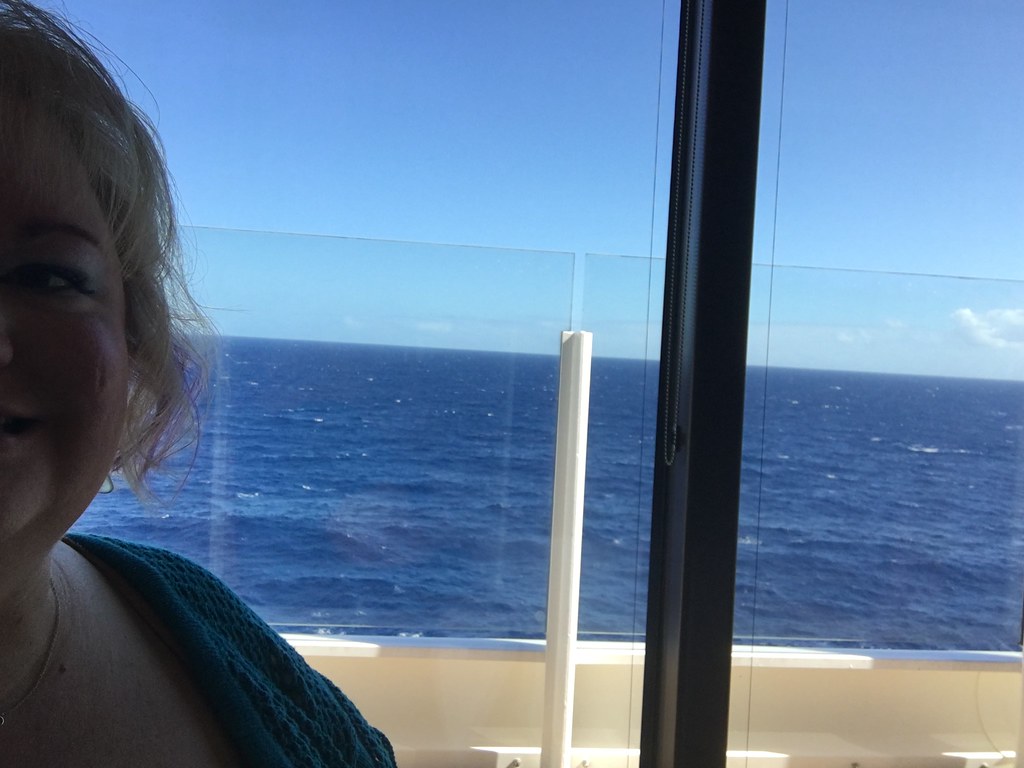 We went up to Palo and Luca, our server, met us in the Meridian Lounge. 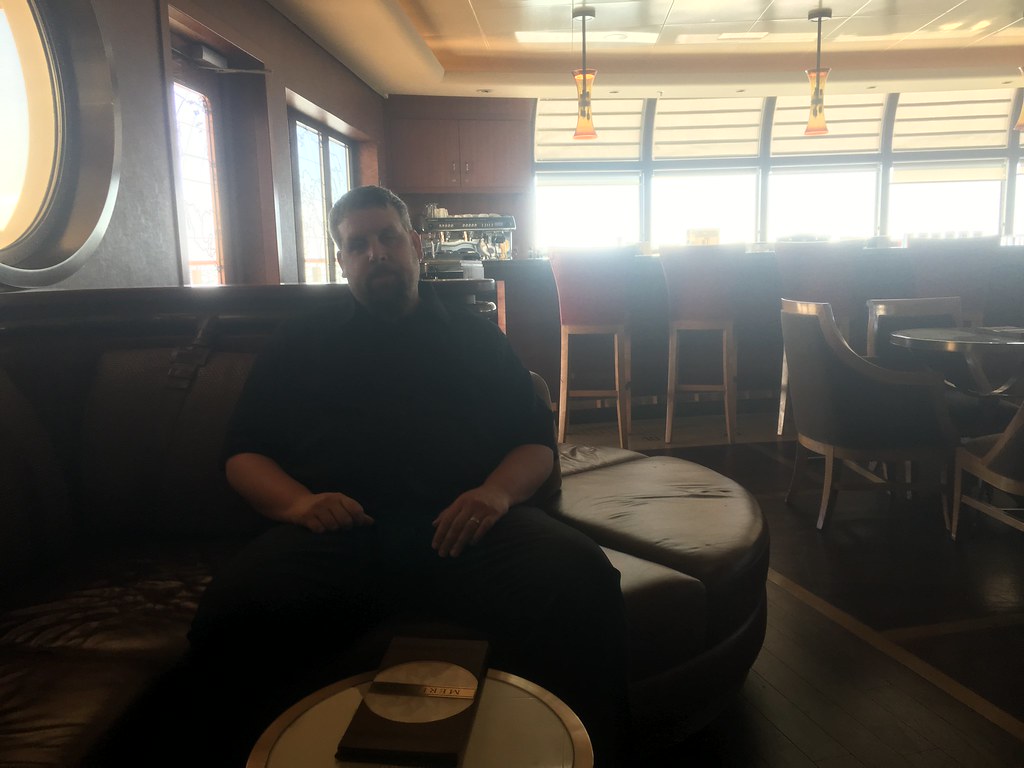 The chandelier at the entrance of Palo. 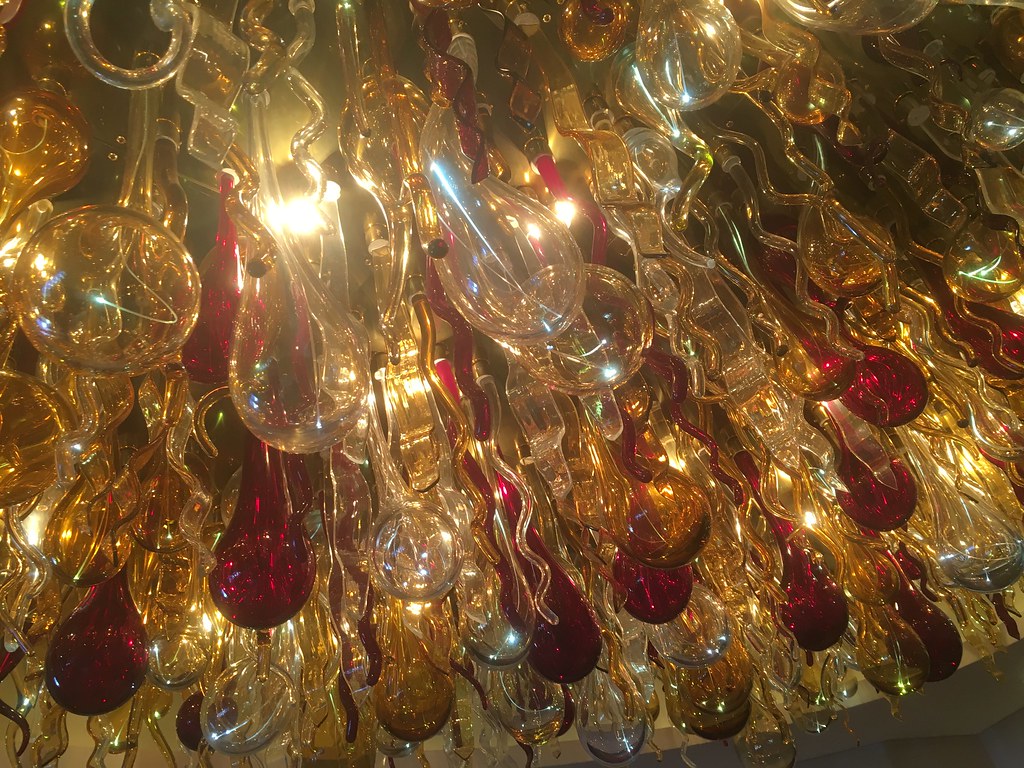 There is a big debate amongst Disney Cruisers as to which is better at Palo- brunch or dinner?  I love them both!  Brunch is amazing. 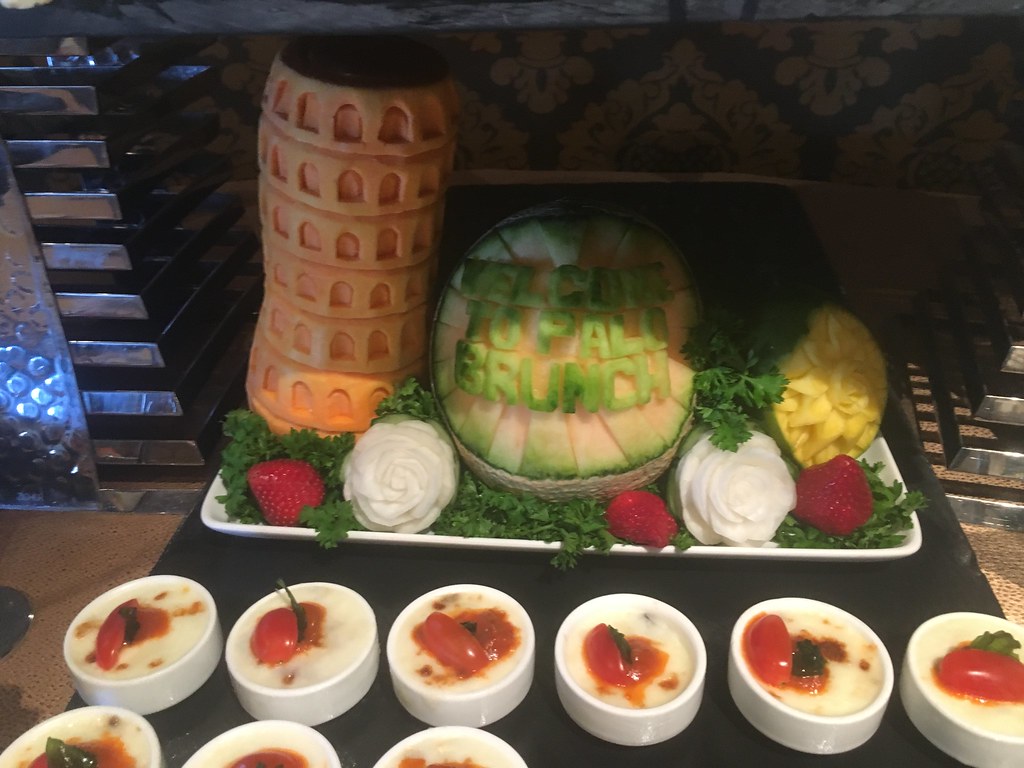 First your server gets your drink order then walks you through the brunch buffet,explaining each section 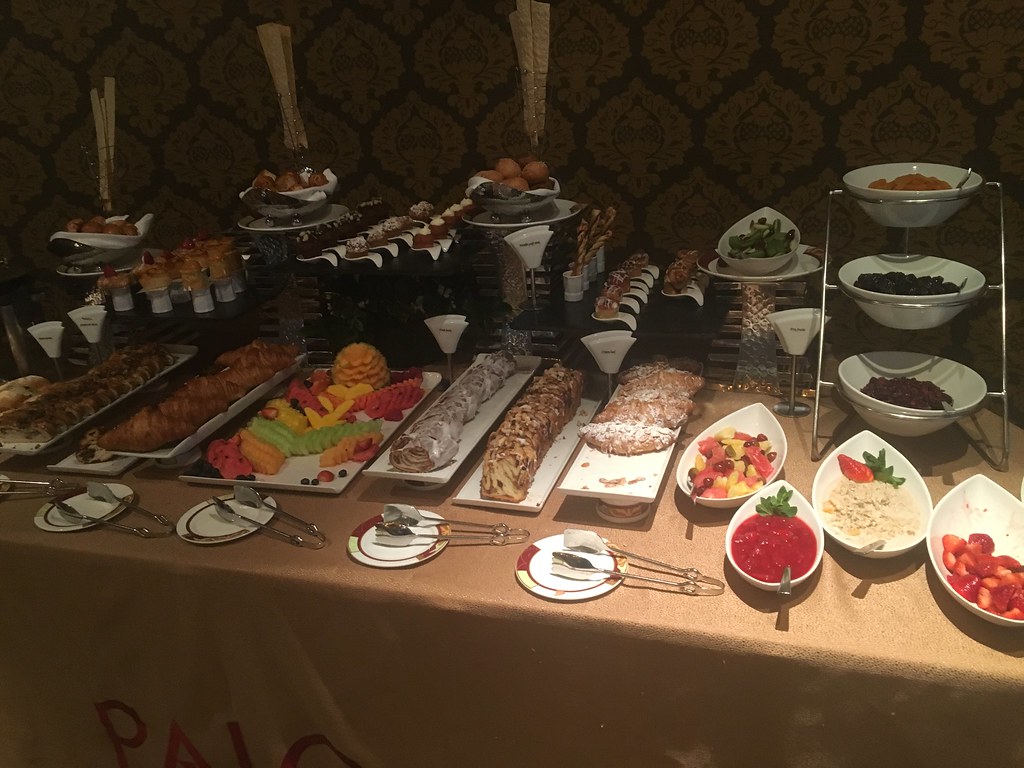 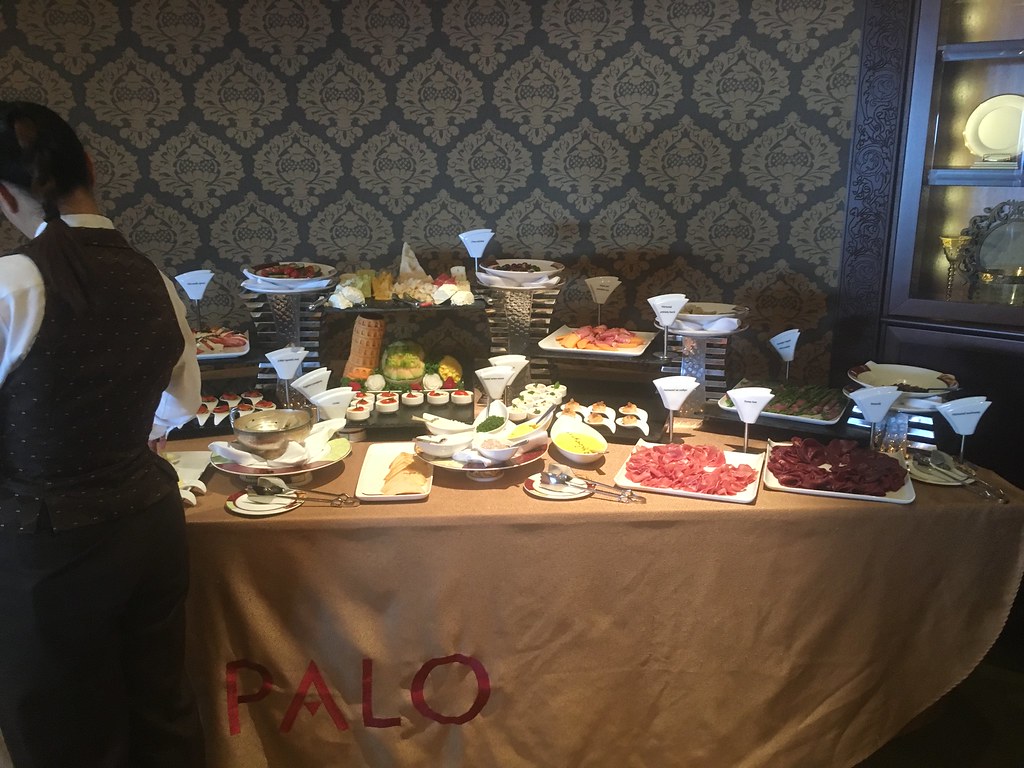 Then you are on your own to explore the buffet. 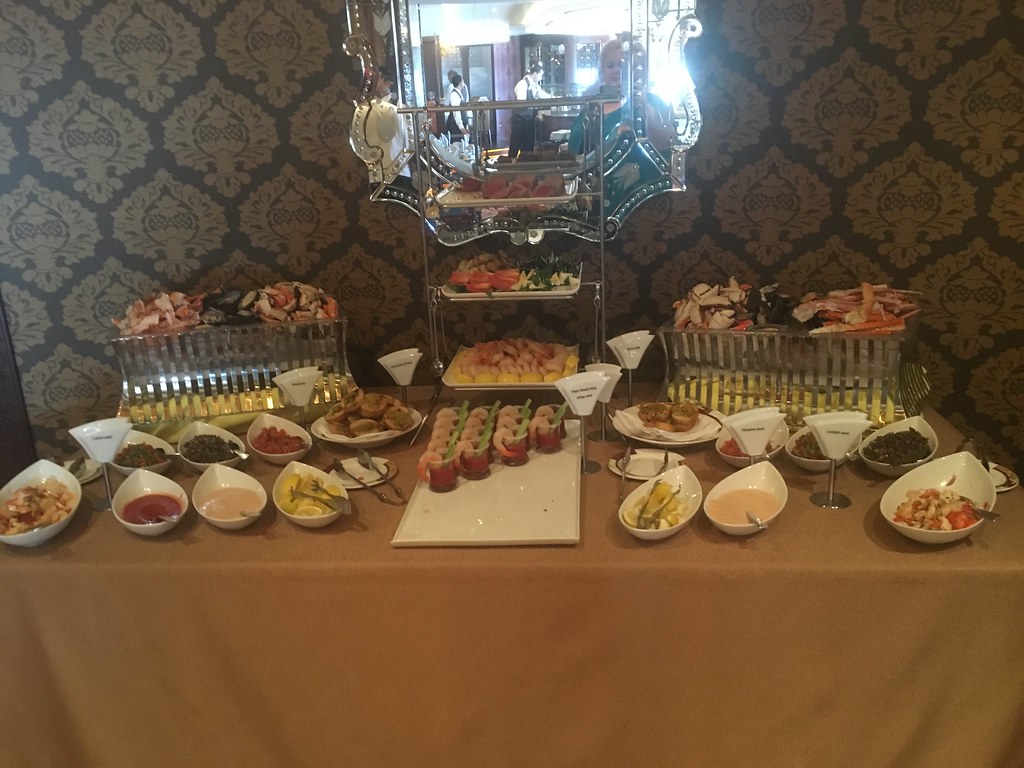 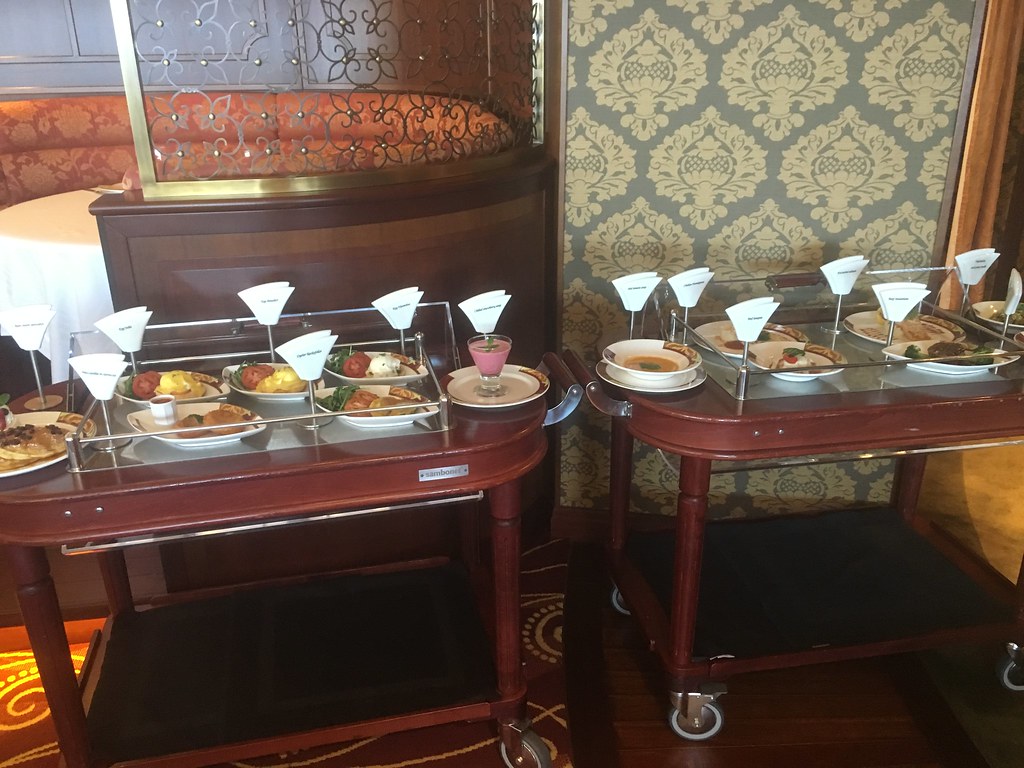 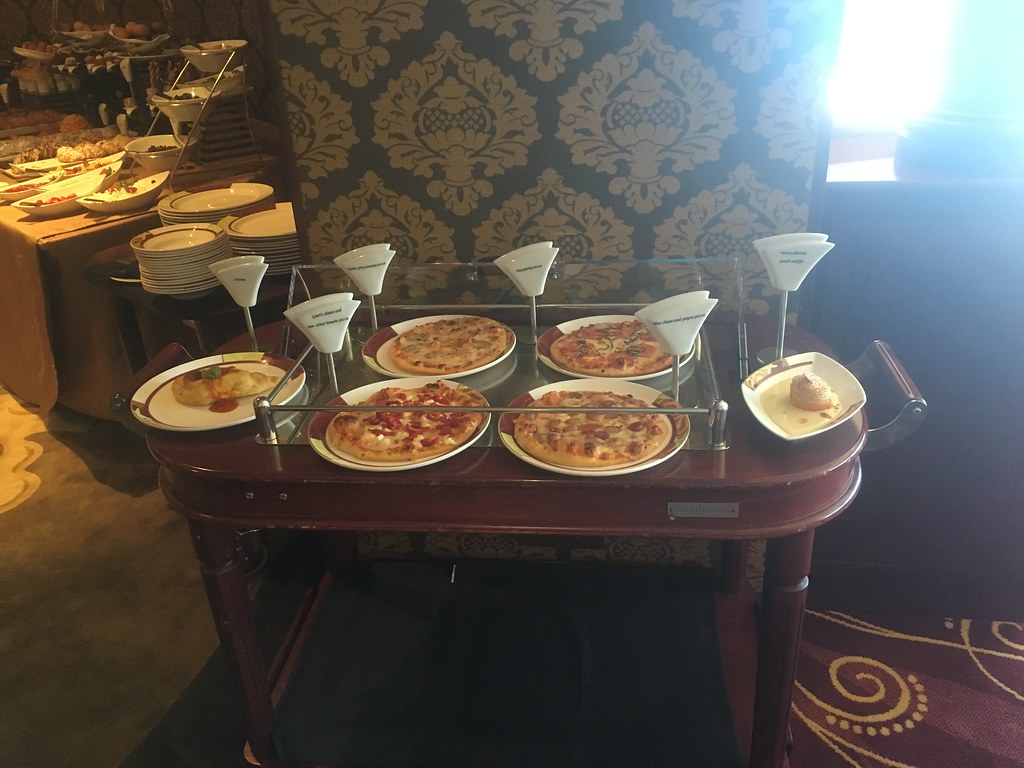 Your server will check in on you from time to time and will place orders for the larger entrees and pizzas.  Today CSP got the orecchiette with salmon, salmon and risotto (he loves seafood!), and lasagne.  Luca brought us both lasagnes even though I said I didn’t want one.  He told me trust me, you want this lasagne.  The portions are on the smaller side compared to dinner so you can try many things.  Luca said he wanted us to try everything!  I ordered a goat cheese and sun dried tomato pizza, chicken parmesan, strawberry soup, 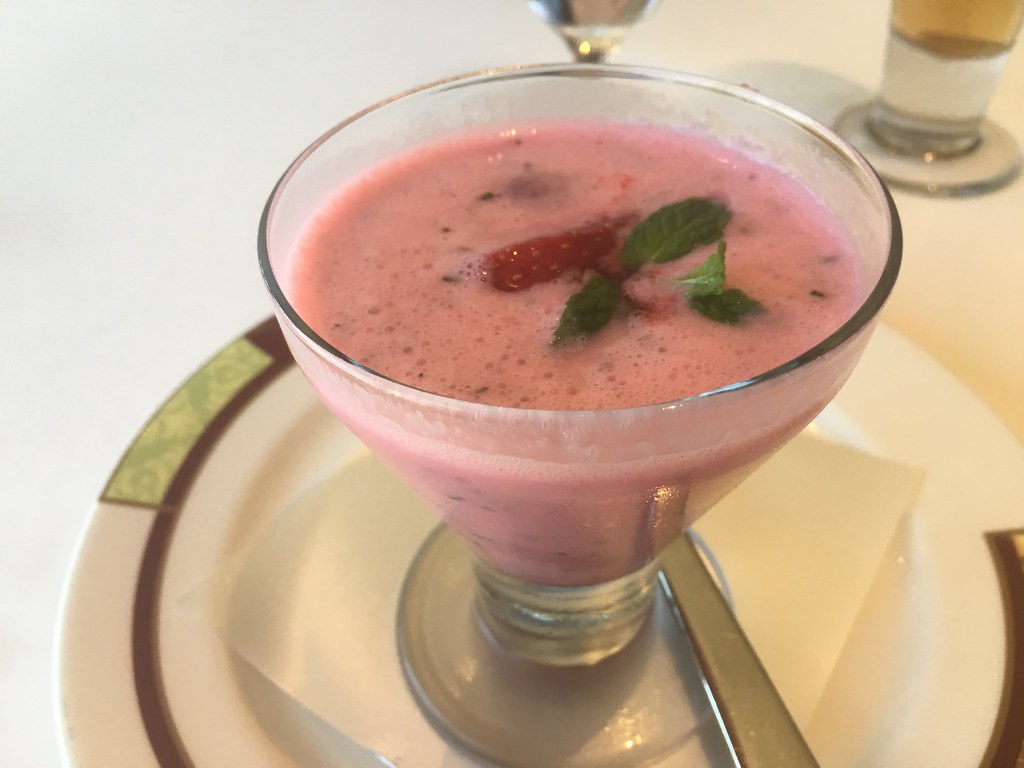 and of course, the lasagne. CSP picked the sun dried tomatoes off the pizza and tried some of it too.  I don’t order chicken parmesan anywhere else- it’s incredible! And Luca was right about the lasagne.  It melted in your mouth.  It was made with a béchamel sauce instead of cheese and the meat sauce had carrots in it, so it was quite different from the lasagne I make at home!  I wish I could make lasagne like that! One of the touches that makes Palo special is how they present their iced tea.  Instead of frozen water ice cubes they use frozen tea! So your tea never gets diluted. Arguably the best part of brunch though, is the dessert. 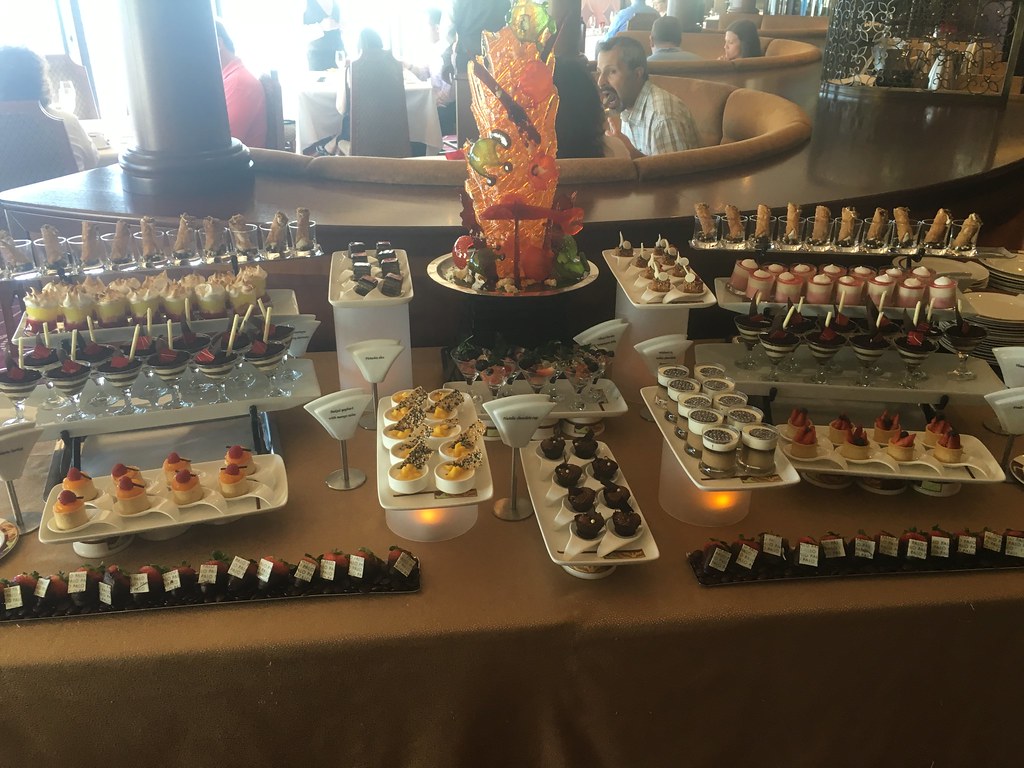 They offer an array of tiny little sweet masterpieces 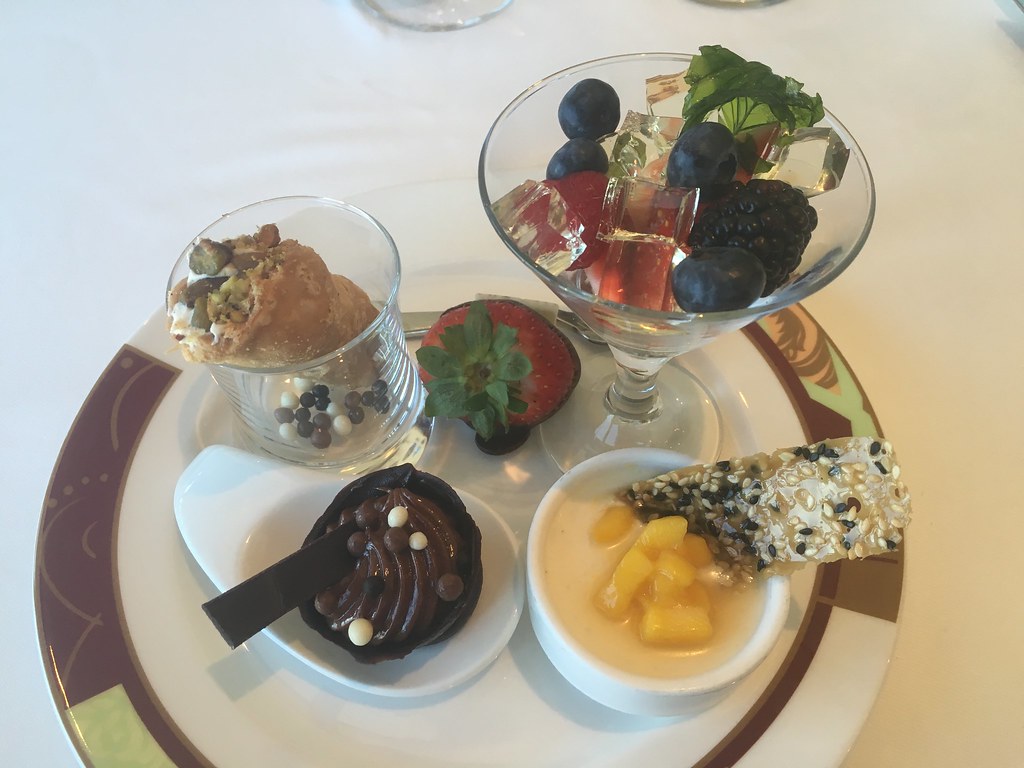 and they always remind you that on vacation calories don’t count! 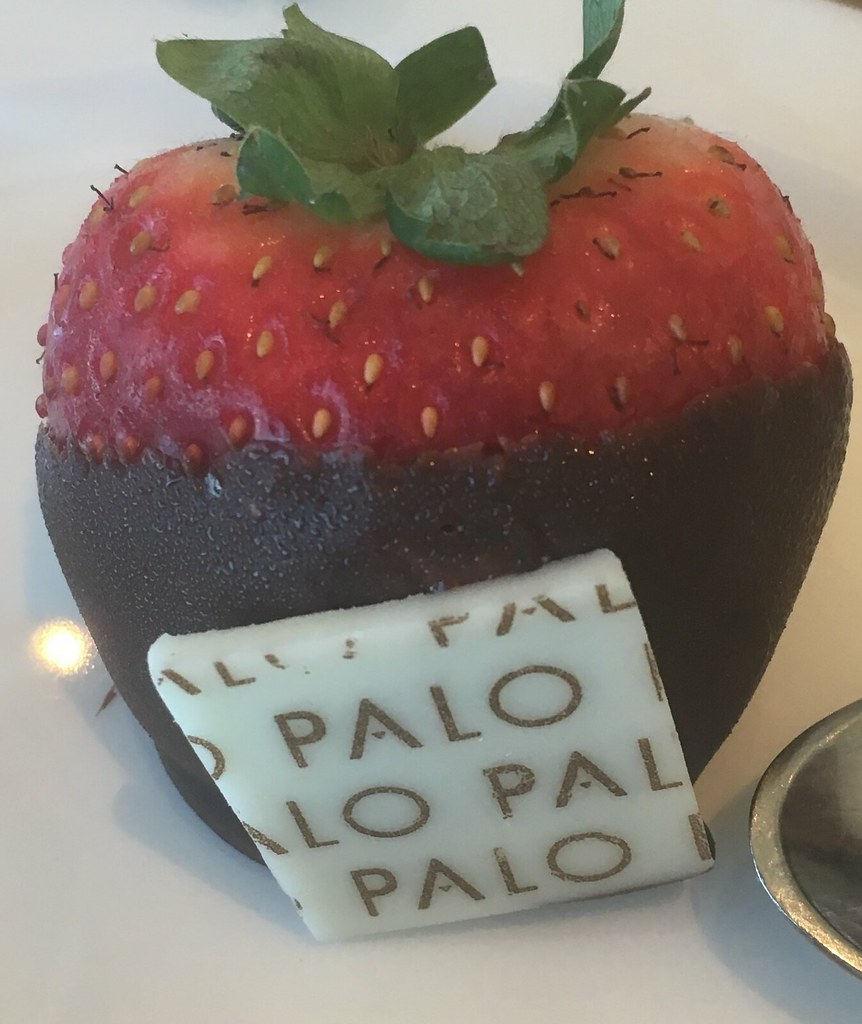 They even give you the tiniest of spoons to taste everything with.  Love.

After brunch we waddled back to our room to relax for a bit until it was time to meet up with Amy and Kevin. On the way we heard bits and pieces of an announcement from the captain, but we didn’t know the full story.  We found out more about that later.

Kevin and CSP went up to the sports deck to play in the golf simulator while Amy, Ellen and I went to the Royal Court Royal Tea Party. We were seated at a table with Ruby (age 4), Ruby’s mom, and Ruby’s Godmother, all from Dublin, Ireland. They were fun to talk to.  The event was too cute. Each girl was deemed a Princess and was announced to the room upon entering. At the table there were gifts waiting for each princess. They received a Cinderella doll, 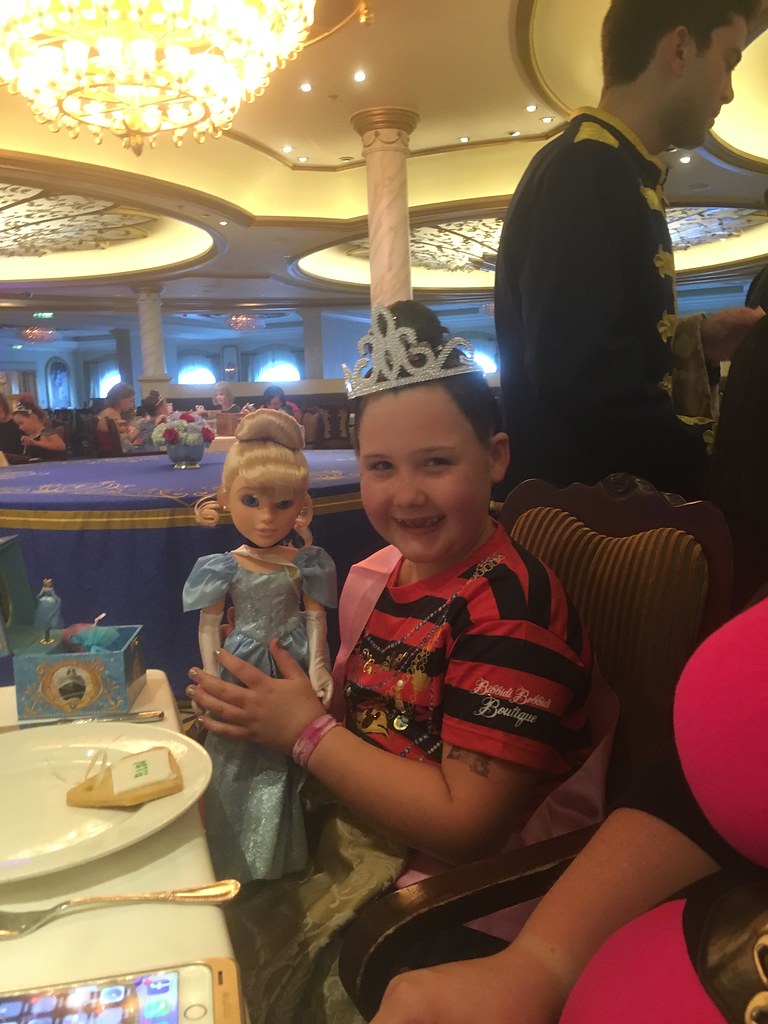 a jewelry box with a charm bracelet and necklace inside, a gorgeous autograph/memory book, a fancy pen for getting autographs, and a cookie with their name on it.  Once we were all seated Lady Chamomile came out and welcomed us. 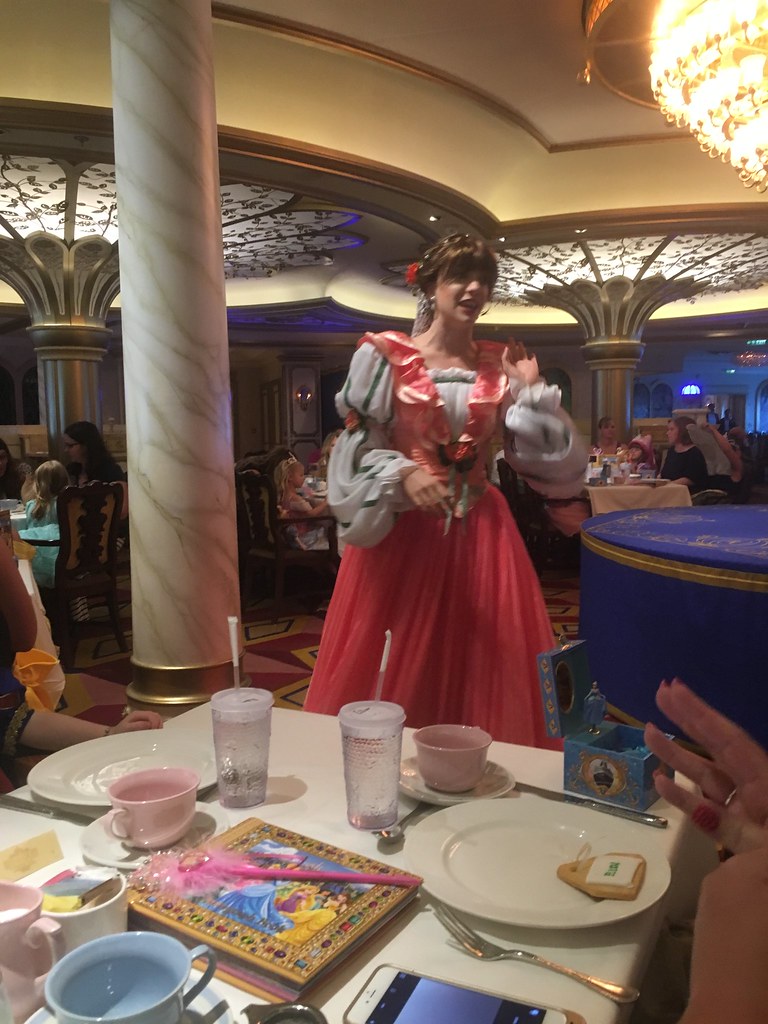 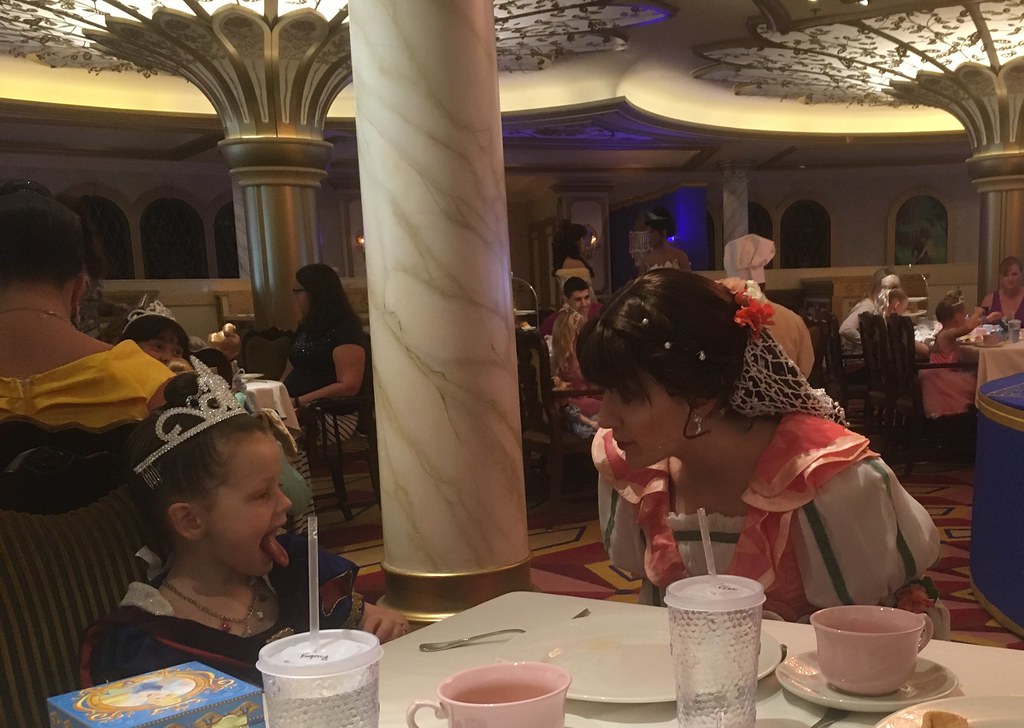 Then Chef Brule (pronounced like creme brule) came out 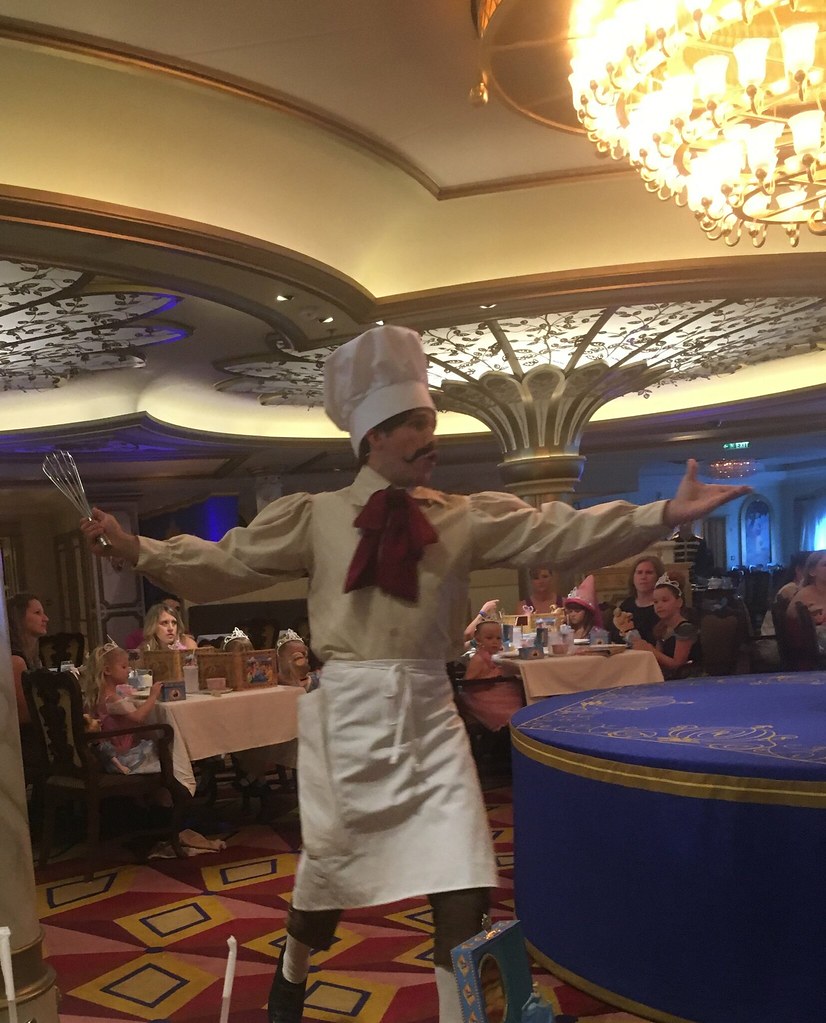 and the two of them sang songs and worked the room. 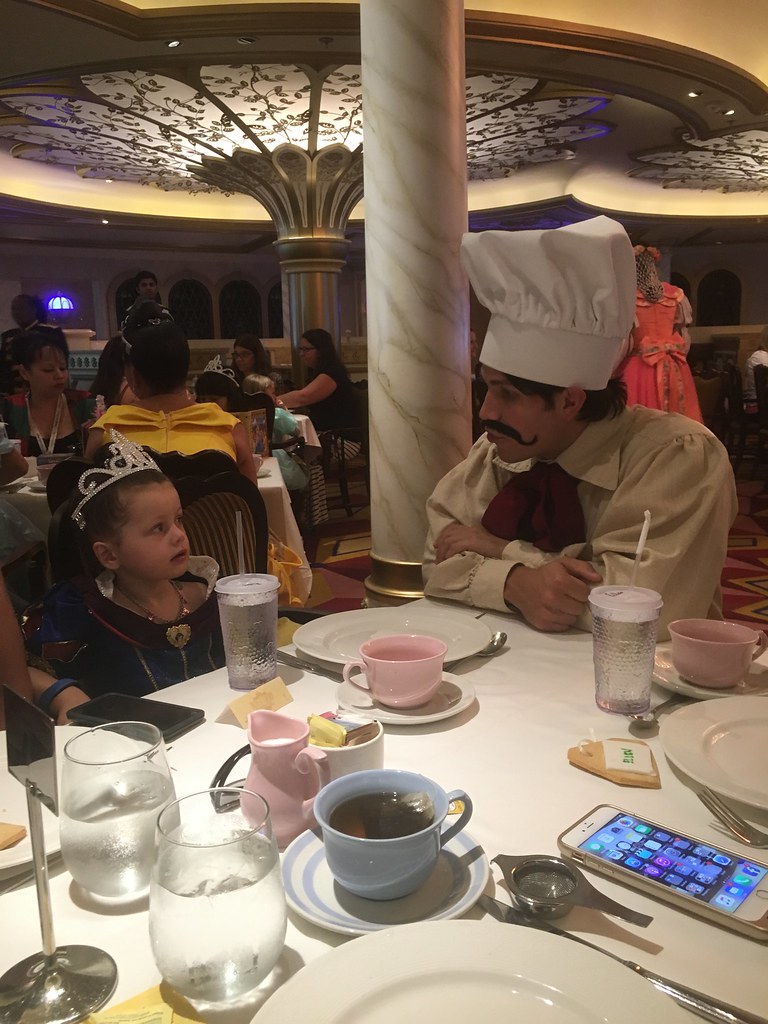 Next it was time for the princesses to arrive.  First came Belle, 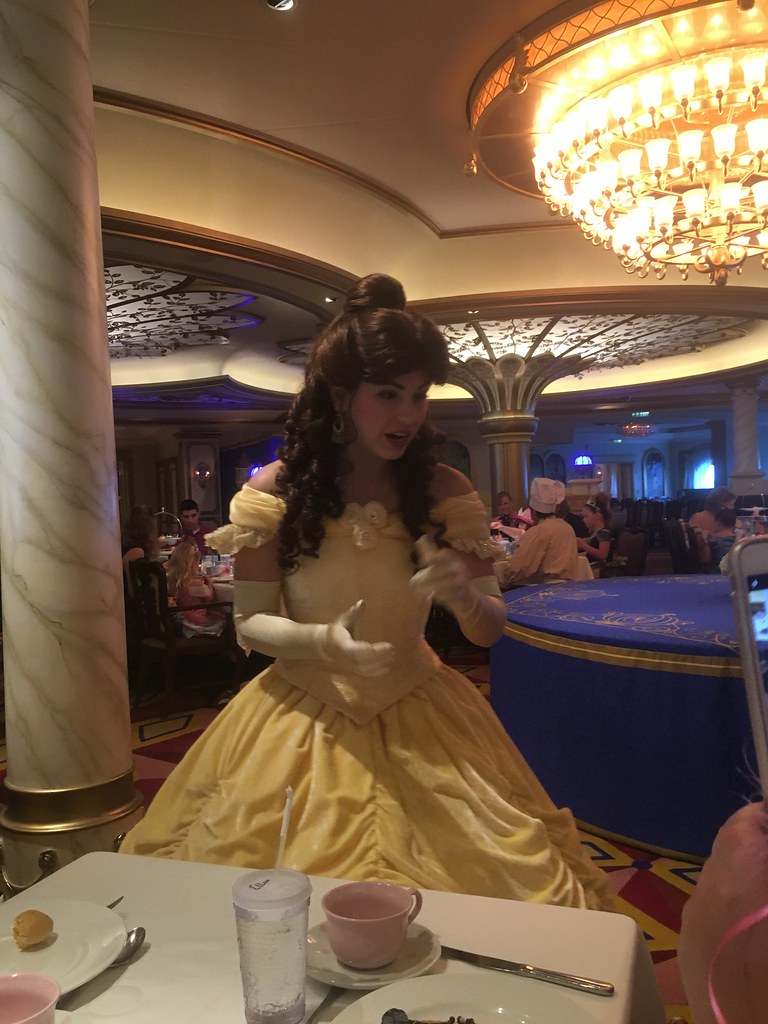 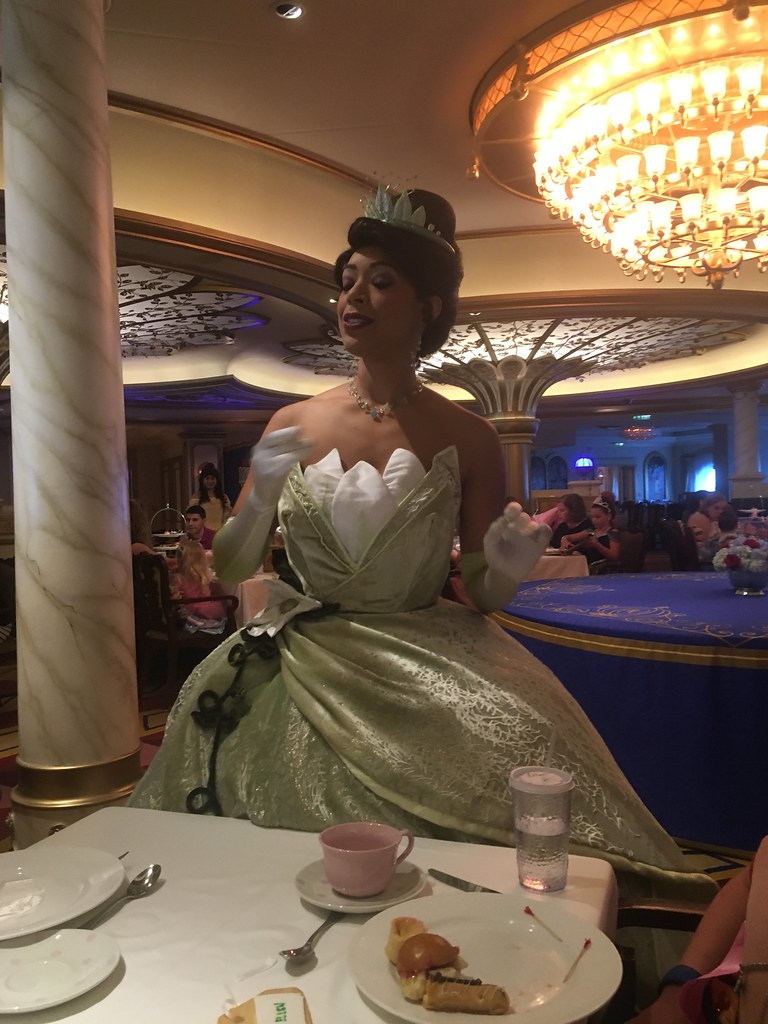 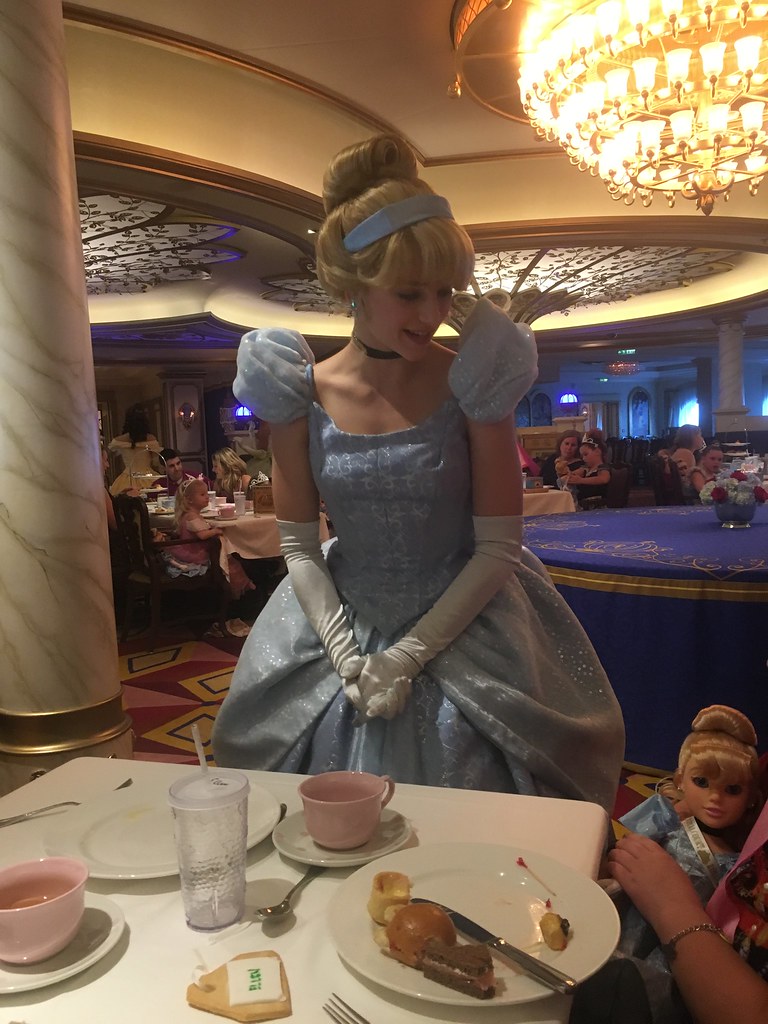 Each princess stopped by the table twice.  The first time to chat with each girl, then the second time to sign autographs and take pictures and chat a little more.  They were all so beautiful and sweet to the girls.  And each princess brought the girls a gift- a charm for their charm bracelets.  We were served teas of our choosing (the girls received apple juice), and they brought out a serving platter full of tiny finger sandwiches and sweets. 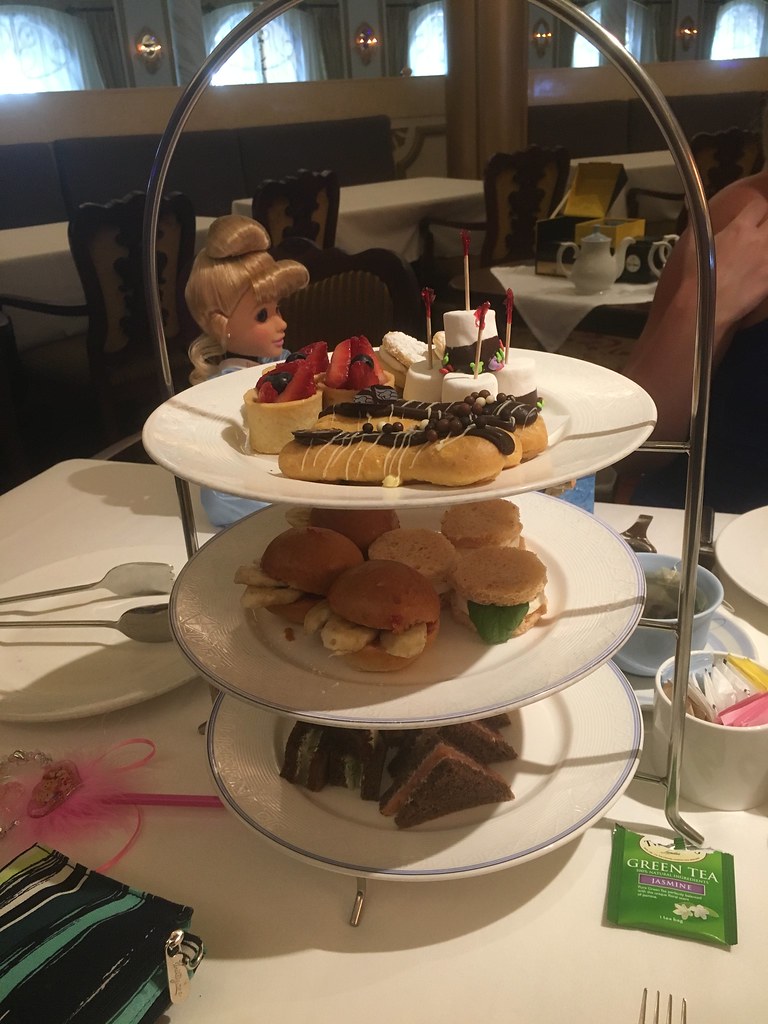 Then the adults were brought warm scones with clotted cream and jam while the little girls each got a cupcake in a tea cup. 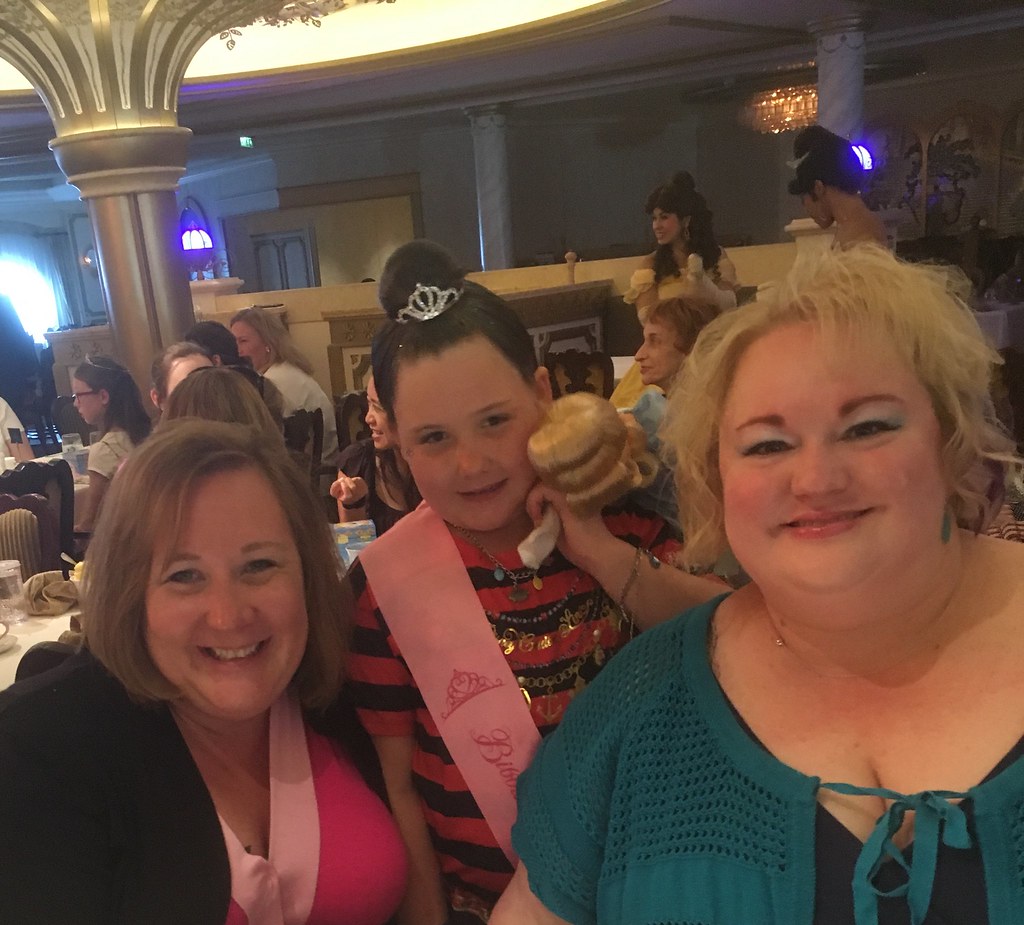 It was all just lovely and I’m sure any little girl’s dream! 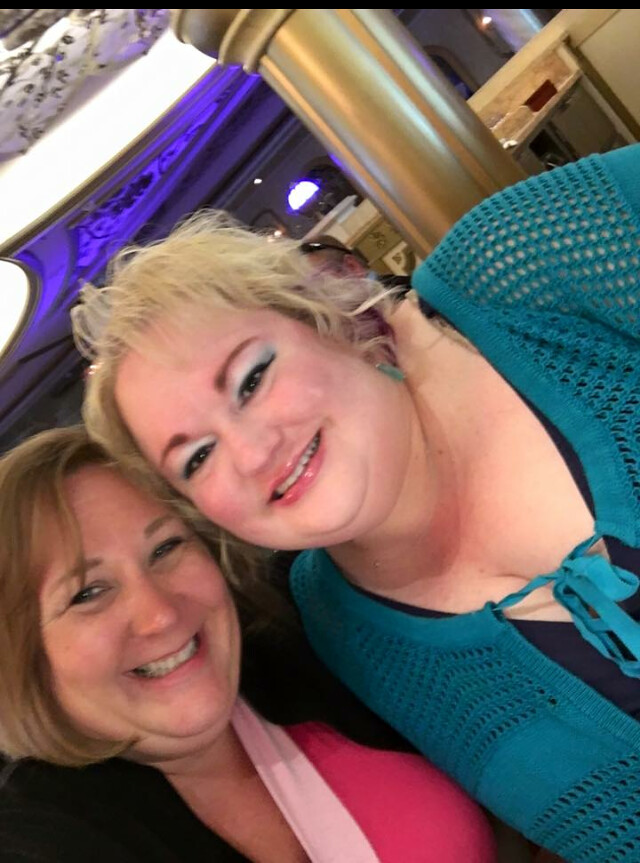 After the tea I went down to O’Gills Pub to meet up with the boys. I visited with them for a while then went to the Future Cruise Desk.  By this time Amy had filled me in on that captain’s announcement.  One of the ship’s motors was out and it meant we would not be able to stop at Castaway Cay tomorrow! Boo! This is the second cruise in a row where we’ve missed Castaway Cay!  In October it was because of Hurricane Joaquin, and now this. Because of missing Castaway Cay and it was technically Disney Cruise Line’s fault, they offered us compensation.  Each stateroom received a $200 onboard credit and 20% off a future cruise. Normally when you book a future cruise on board you get a 10% discount. So you can imagine the line was pretty long.  I found Amy in line ahead of me, and got in line behind a couple we’d met during the cruise. Chatting with them made the wait more bearable. I booked our cruise and went back to the room to meet up with CSP and get ready for dinner.

Dinner tonight was back at Animator’s Palate.  Tonight everyone drew a cartoon person on a paper we were given. 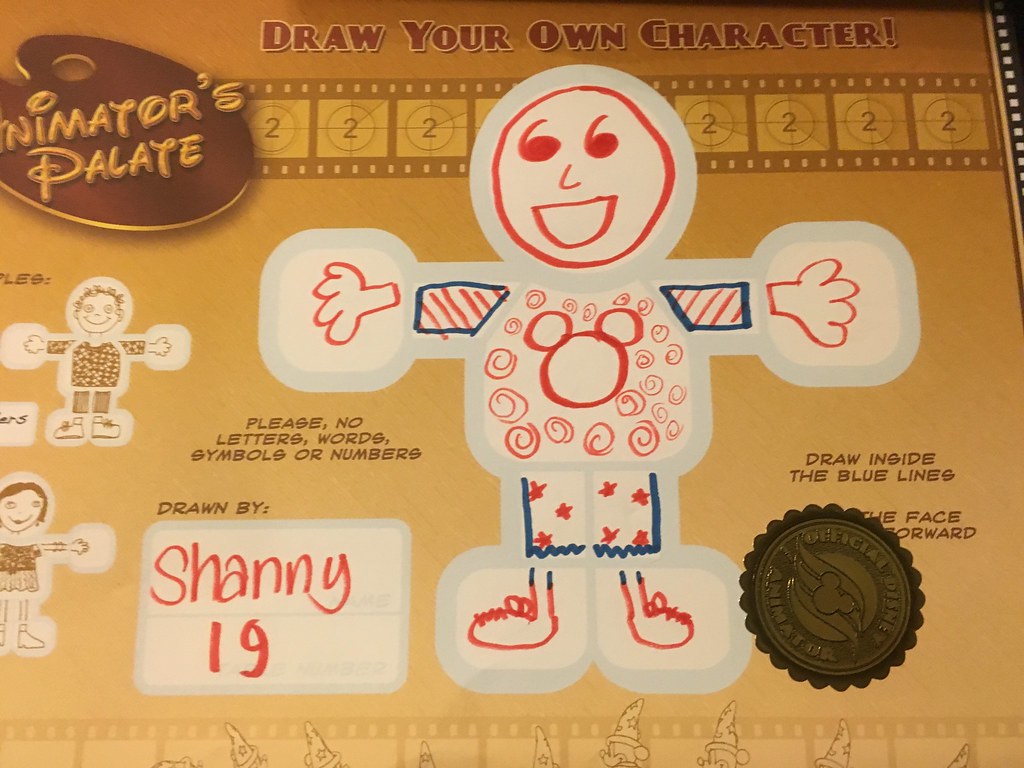 They were collected by the waitstaff and animated on the big screens around the room. It’s really cute how they do it.

After dinner it was back to the room for bed, where we were greeted by a towel frog! 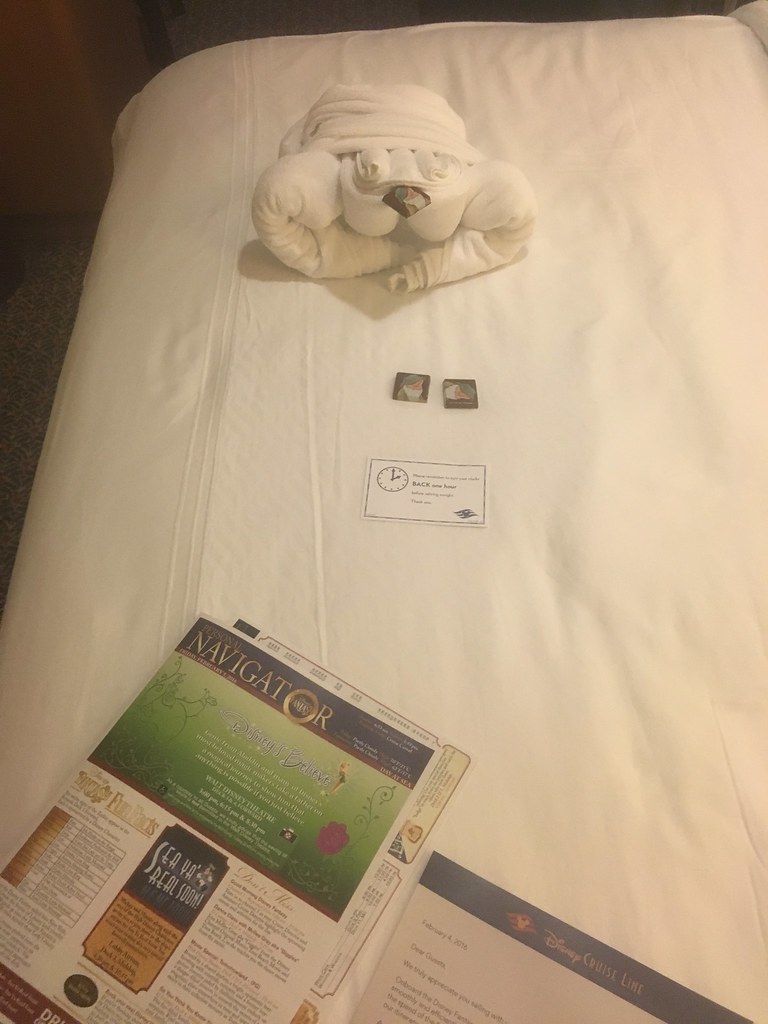