We woke up at 6am to dress and pack last minute things and we were out in the lobby about 7 am.  We decided to skip breakfast on the ship (it’s not the buffet, it’s a sit down and ours wouldn’t have been until 9 ish) so we handled our own luggage and walked off the ship about 7:30 am.  We got in our cars and CSP & I followed Amy & Kevin as we tried to make our way out of Miami.

We made a turn and there was a rail road crossing with the lights going and the bars down.  So we waited.  And waited. No train. Then a taxi behind me started honking its horn.  What was I to do?  I was trapped!  All the sudden this guy got out of his van.  His friend drove the van through the bars.  Van Dude then calmly walked over to a tree and ripped off a branch.  He walked back to the rail road crossing bar and held it up over his head with the branch, all the while EATING A SANDWICH.  That must have been one good sandwich!  It was hilarious!  But we got through!  And on the road to Orlando.

Florida has a million toll roads and turnpikes and it cost us $20 to drive from Miami to Orlando.  Yikes!  Luckily they also have these travel plazas in the middle of the highway so you can access it from both directions.  You can get gas and food.  We stopped at one about an hour outside of Miami and got bagels and gas then made our way to Orlando.

We made it to Walt Disney World and the Wilderness Lodge! 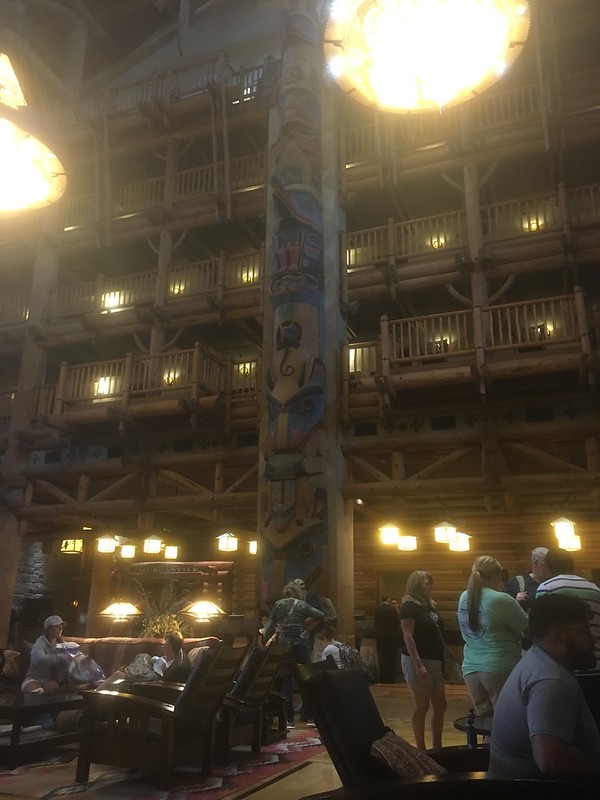 It’s so nice!  We were staying in one of the 2 bedroom villas there.  The lobby was just gorgeous!  We checked in then went to our villa and got settled in and took a wee nap. 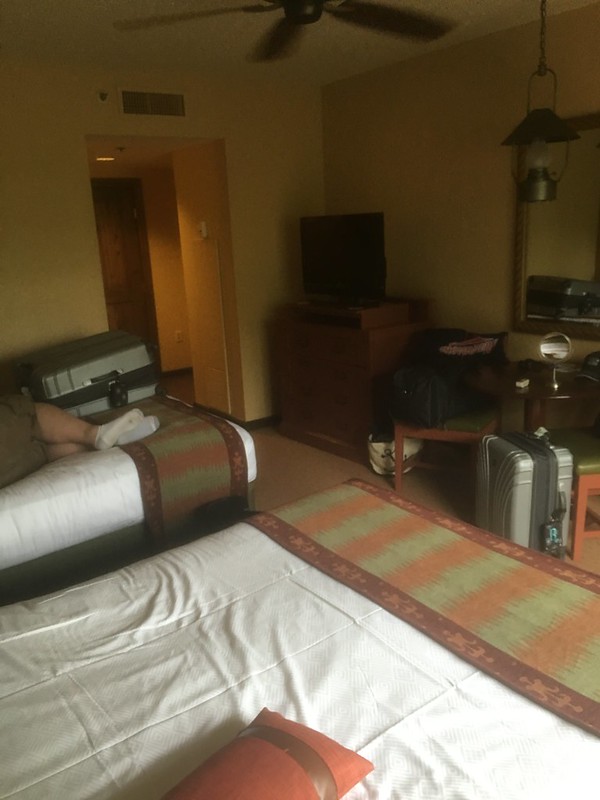 We woke up and freshened up and got dressed for Mickey’s Not So Scary Halloween Party! 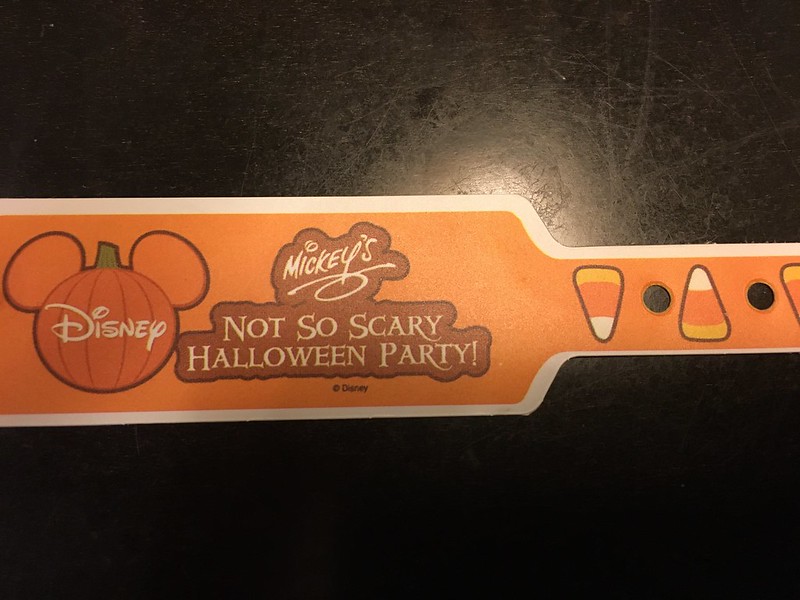 Amy had matching orange shirts made for all 4 of us with our names on them.  CSP won’t wear anything with his real name on it so his says CSP!  Ha! 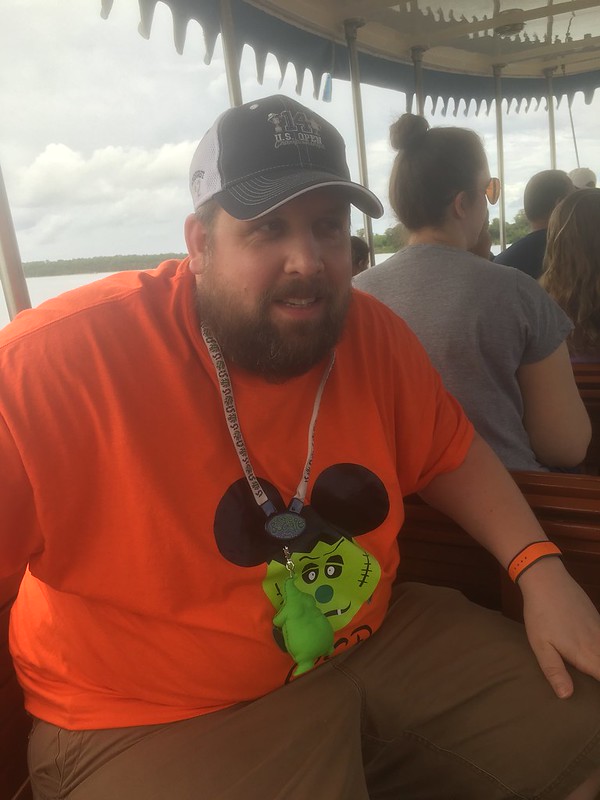 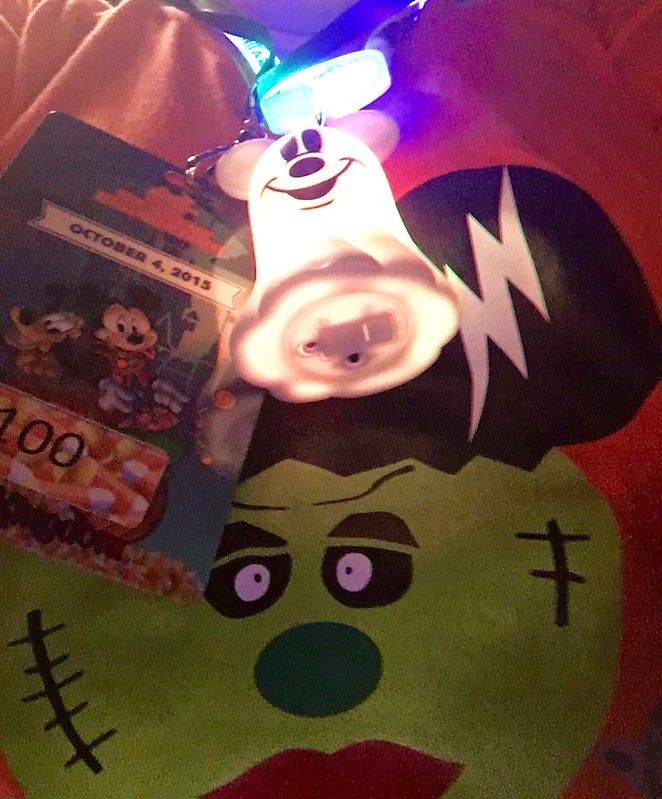 and for us girls she had tiny witches hat headbands. 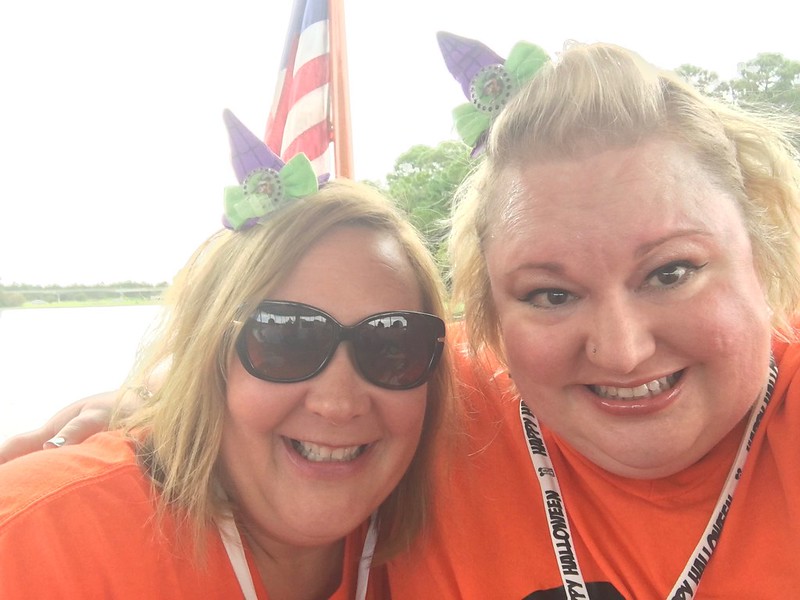 So cute!  Please disregard the deranged look on my face!  I was excited!

We took a boat over to the Magic Kingdom 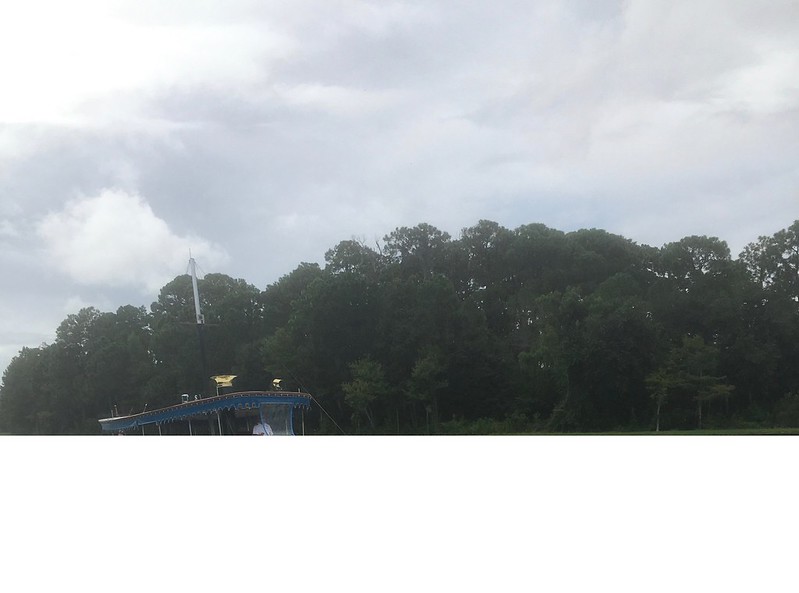 and got checked in just in time for our dinner reservations at Tony’s (the Lady and the Tramp restaurant).  We were all hungry as that breakfast stop was a long time ago!   We had a great dinner then took the train over 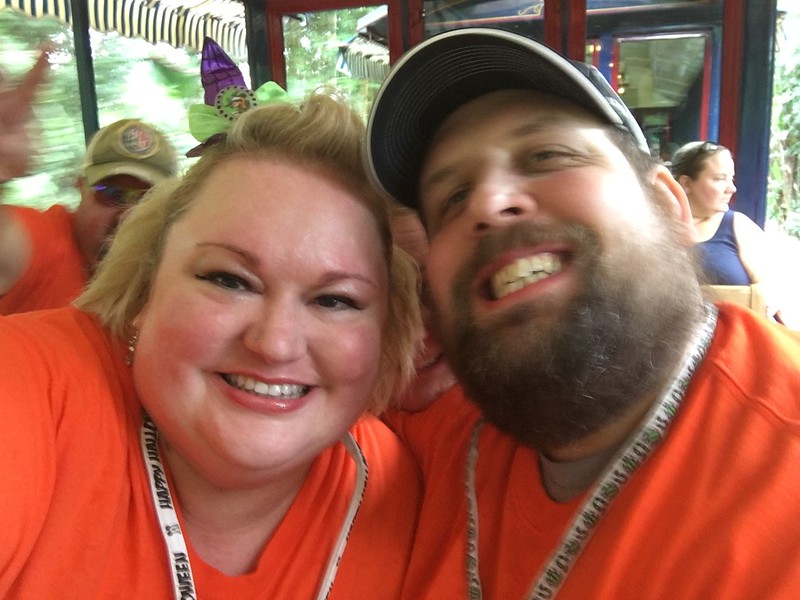 to ride Big Thunder Mountain Railroad.  CSP & I haven’t been to the parks since 1999 so we were thrilled to get to ride some rides.  And God bless Amy because she got us fast passes so we wouldn’t have to wait in line.  Just standing on CSP’s foot is harder than actually walking.  Getting on and off rides proved challenging with his big boot.  But the staff was great and very accommodating.  For instance on the Haunted Mansion you have to hop into your Doom Buggy from a moving walkway.  Well they slowed it down for us so CSP could get in and out without killing himself.  We rode Pirates of the Caribbean and even It’s a Small World. 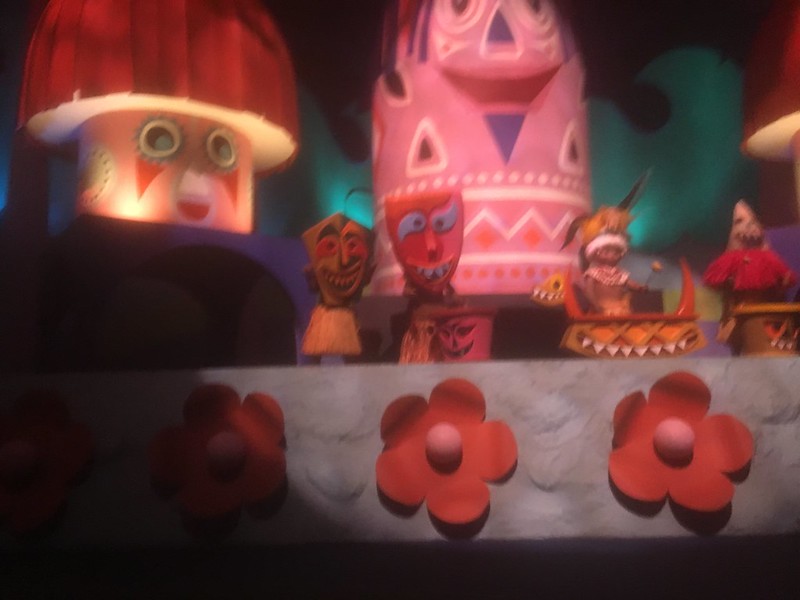 The weather was perfect!  It started out cloudy, then it drizzled, then the temperature dropped to nice and cool and the drizzle stopped.  It was awesome! 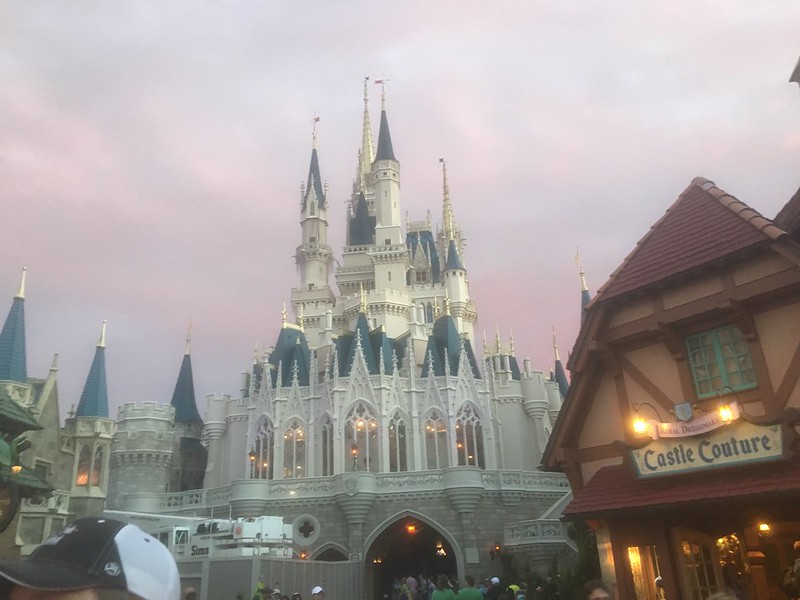 The Magic Kingdom was all decked out for Halloween! 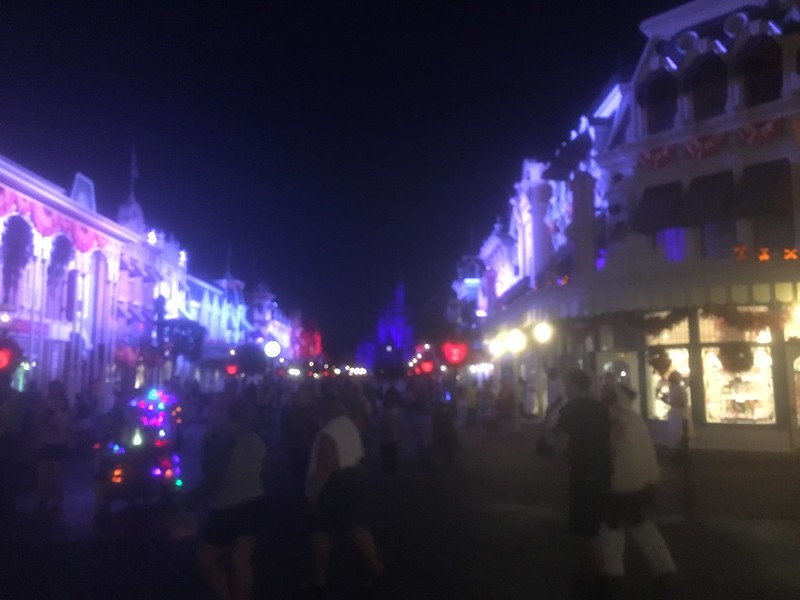 It looked so cool all lit up at night!

Before we went on this trip I polled all my Facebook friends about whether or not I should take my big DSLR camera or just my iPhone.  Thankfully I was convinced to just take my phone.  I got great pictures and didn’t have to worry about lugging around a big camera!  It helped that just a couple days before we left I was able to get the iPhone 6S which has a 12 megapixel camera.  I was pretty impressed with its performance!

After riding our rides it was time for the parade.  Amy got us the Happy Hallowishes Dessert Premium Package.  So at 8 pm we went to the Town Square and had preferred viewing areas all roped off for the parade. 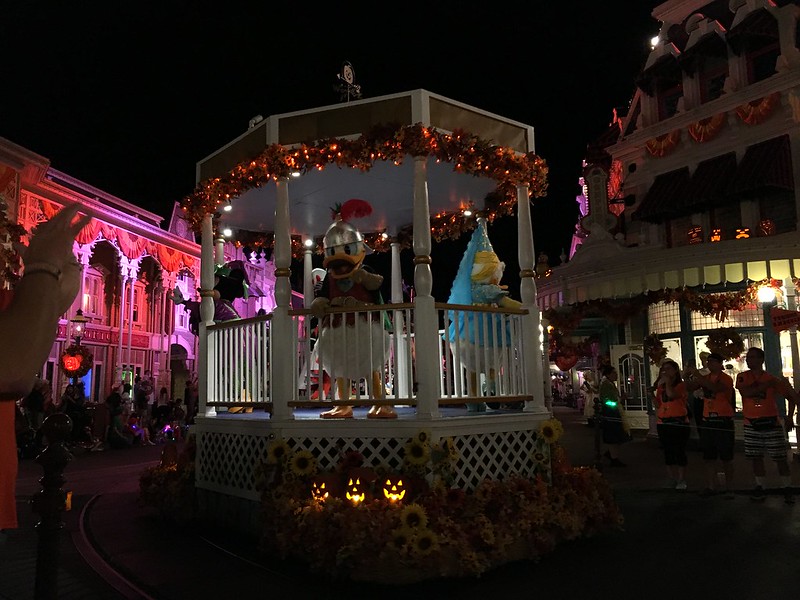 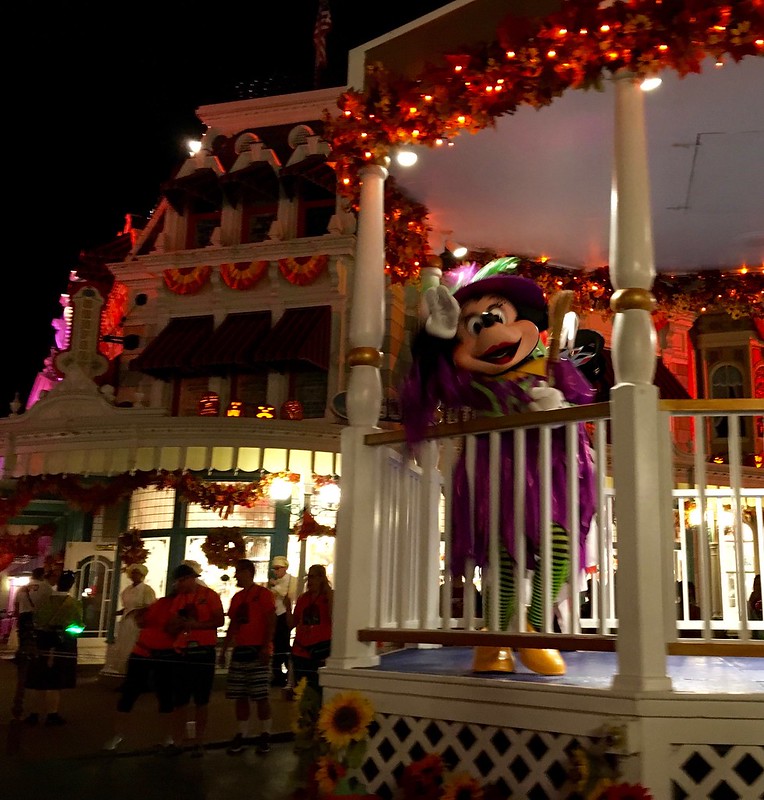 The parade was awesome! 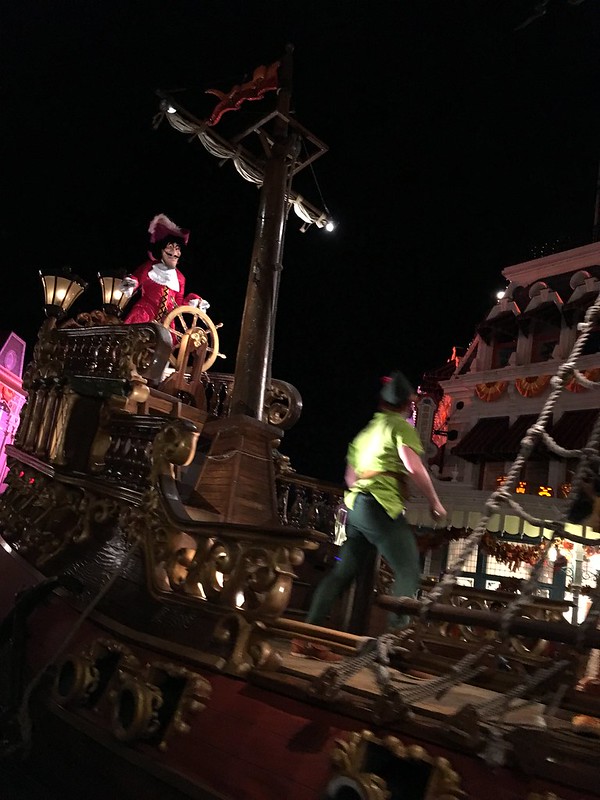 I know this pic is blurry but it is of the Gravediggers, who were so great and I kind of know one of them because he’s my friend Leah’s brother! 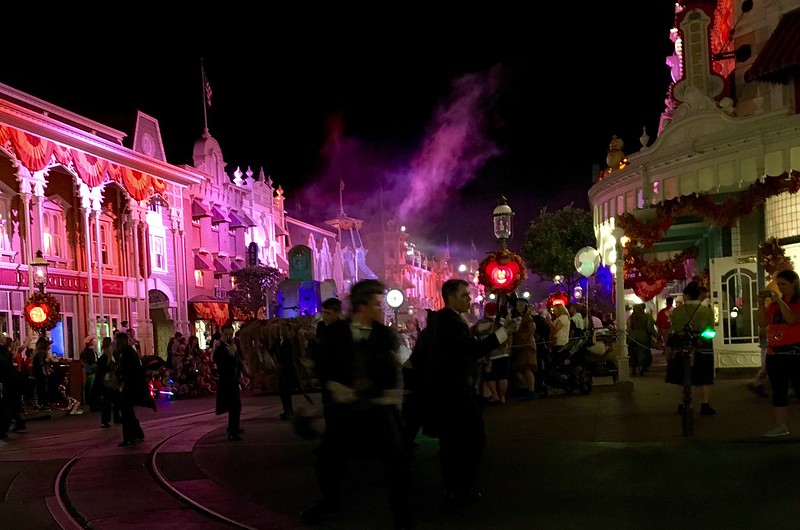 Baloo the Bear came over and kissed my hand and another character (I can’t believe I can’t remember which one!!!) high fived me! 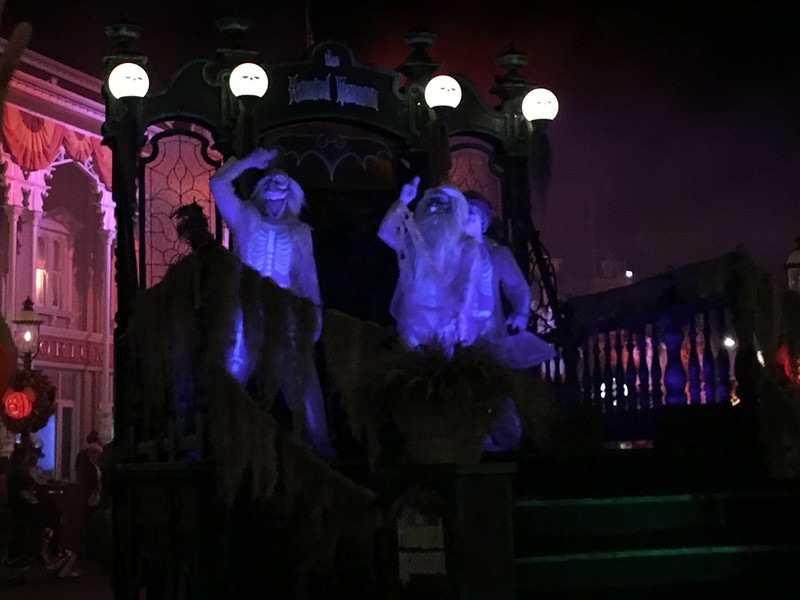 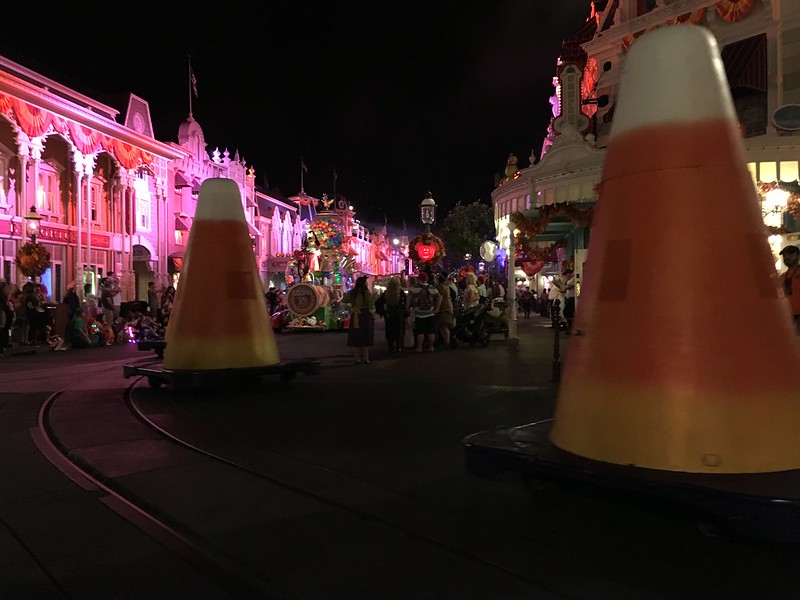 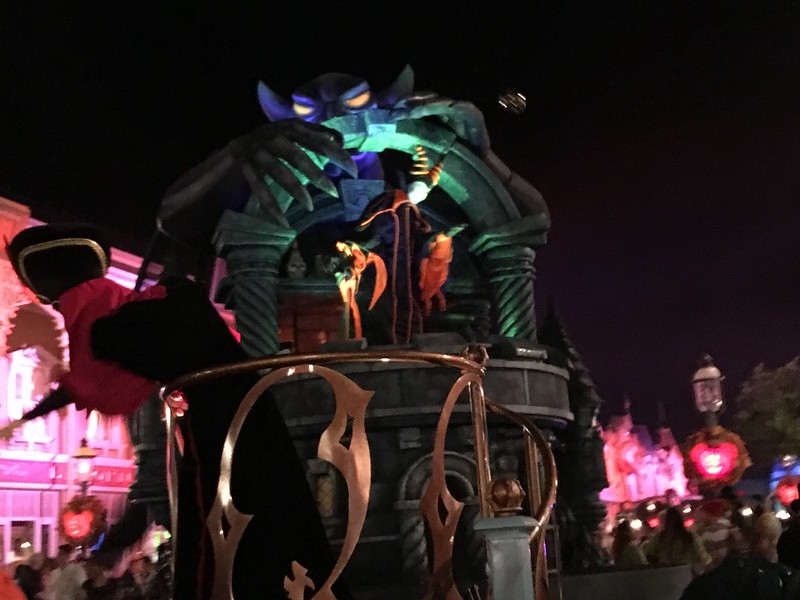 We even got to see the Headless Horseman on a gorgeous, giant black horse. 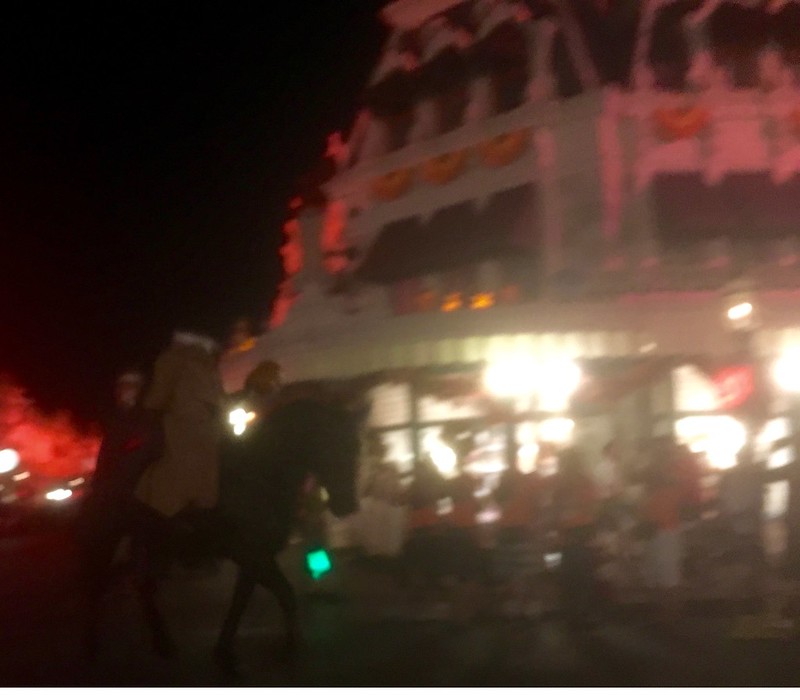 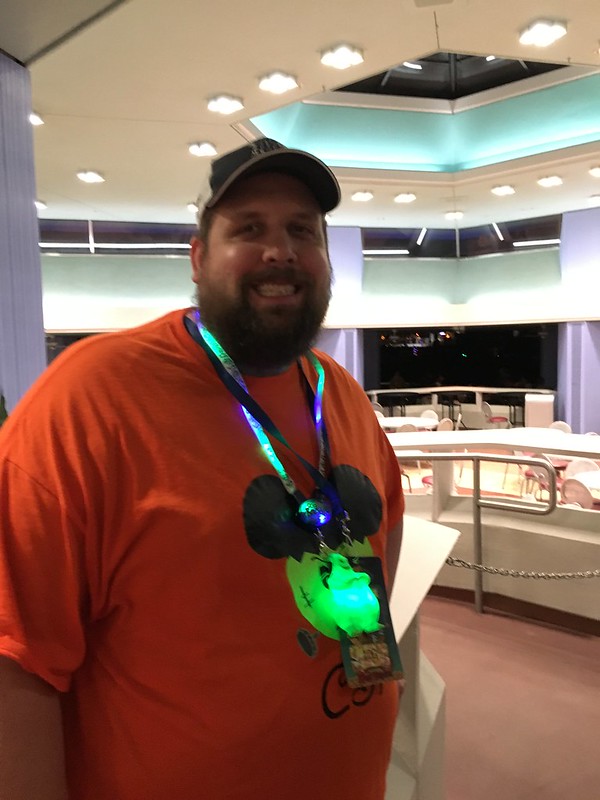 for a dessert party.  There was a lovely dessert buffet with Halloween themed desserts. 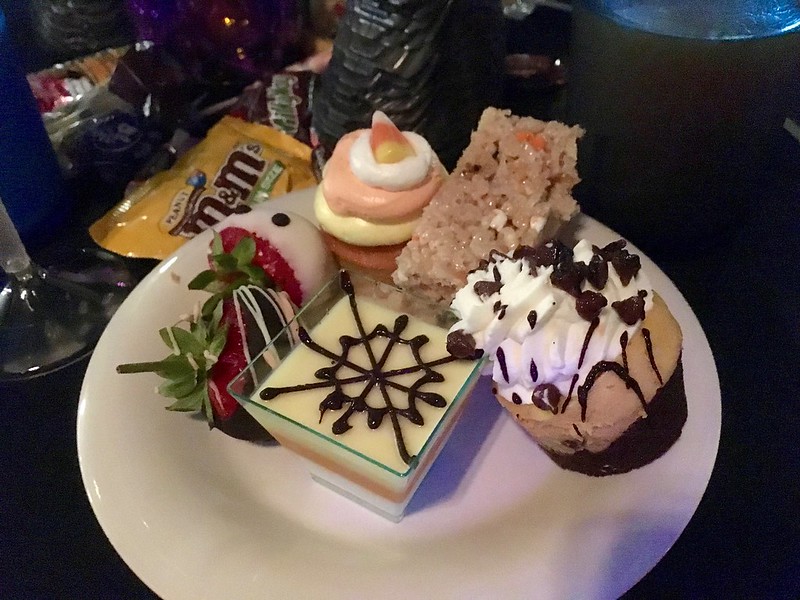 So tasty!  Then at 10 the Hallowishes fireworks show 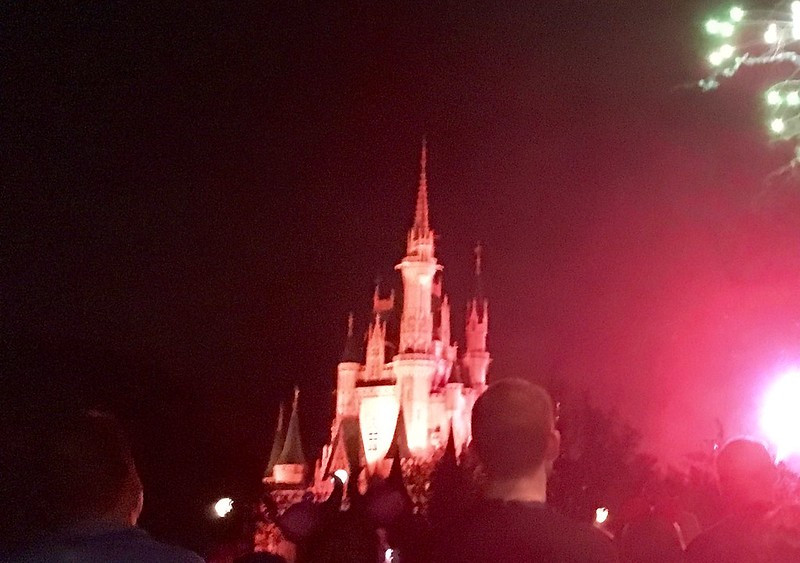 began and we had perfect seats for it. 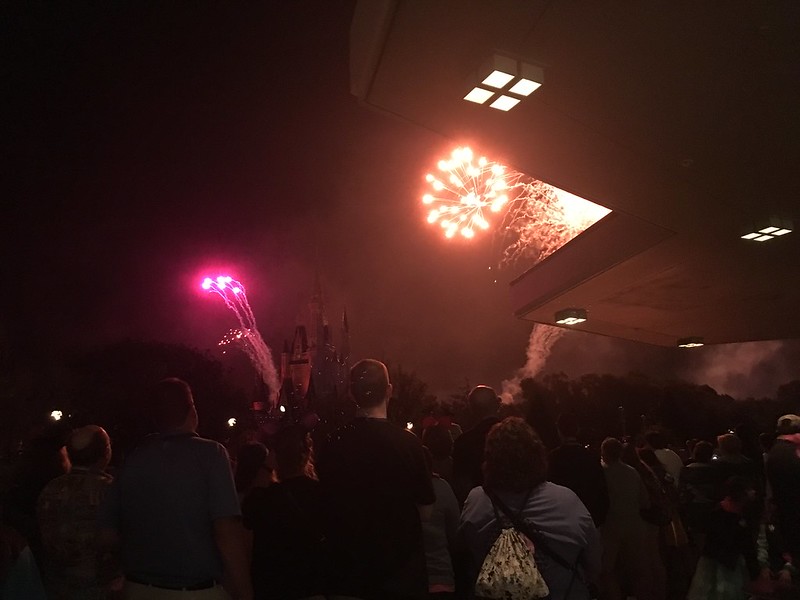 Once the fireworks show was over we made our way back over to the front of Cinderella’s castle for the Sanderson Sister’s Show. 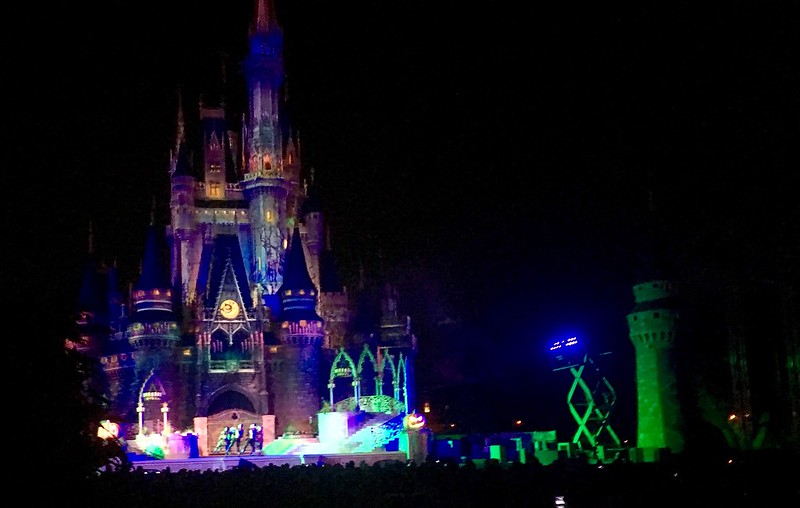 It was super cute!  By now poor CSP was really hurting.  And silly boy wore a short sock under his boot thinking it would be cooler.  Well instead of being cool it allowed his boot to rub his leg raw!  So we decided to call it a night and headed back to the docks to take the boat back to the Wilderness Lodge.

When we got back to our villa there was a big Halloween sign on our door.  We opened the door and found the entire common room had been decorated!  There was a flickering candelabra, spiderwebs everywhere, luminaries all over, candy, and of course a huge Mickey Mouse on the coffee table!  It was SO cool!  And I totally forgot to take pictures of it all!  I was so tired from our long, but amazing day, and I was just in awe of it and so surprised!

We enjoyed the decorations for a little while then went to bed.  We had to be up early in the morning!