CSP & I had been looking forward to this day so much!  He had never been to Key West and it had been a good 10 years for me so we were both excited!  But before I get into today, I forgot to include something about yesterday.  CSP’s mom and the pugs were able to watch us set sail via www.portcanaveralwebcam.com!  She thought it was really cool!

We woke up early and had breakfast at Lumiere’s.  We both had eggs benedict but CSP’s was eggs benedict ROYALE.  Fancy boy!  Back to the room to get ready for Key West.  We were in port from 12:30 pm – 7:30 pm.  We went outside and got in line for the tram to town. 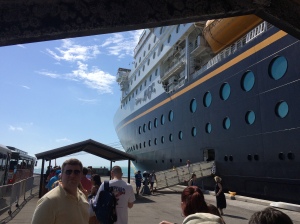 Beautiful day!  Once the tram dropped us off I called Tropical Rentals and they sent an electric car to pick us up and bring us to their shop.  I had researched electric car rentals online and Tropical offered a third hour free if you brought in a screen shot of their coupon on their website.  The driver was super nice and navigated the crazy little Key West streets really easily.  We rented a 2 seater electric car and drove to Blue Heaven for lunch.

I’d asked on Facebook if there was any place in Key West that we needed to make sure to stop by and everyone said Blue Heaven.  Then my parents were in Key West the 1st week of January and they tried it and LOVED it.  So off we went!

It’s all open and you sit in a courtyard under the canopy of trees and sail cloths.

And plenty of roosters!

They go right up to the tables!  They say not to feed them, and we didn’t, but plenty of people do!  There were a couple of cats hanging around too but it was harder to get their pictures.  We missed brunch but lunch did not disappoint!

I had a grilled cheese sandwich with tomato and bacon.  SO yummy.  CSP had mahi mahi on their black bean bowl.  He said it was the best piece of fish he’s ever had!!!

On the way to the men’s room, CSP found this giant banyan tree where all the roosters would hang out when they weren’t begging for food. 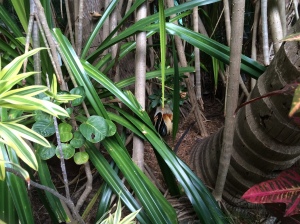 And they aren’t quiet either.  It’s so fun to sit there having lunch and hearing them make all their chicken noises!  Of course we finished lunch with a piece of Key Lime Pie.

After lunch we toured all around the island in our little electric car.  It was SO FUN!  I’d have taken more pictures but I was holding on for dear life!   I did manage some though.  This is a bar with money ALL OVER IT. 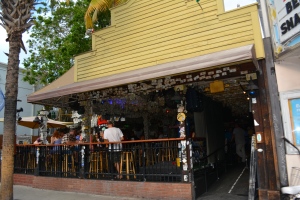 Mile marker 0.  Quite literally the end of the road!

Walgreens in an old movie theatre.  I love how Old Town in Key West makes businesses use existing structures.  Keeps the charm of Old Town in tact. 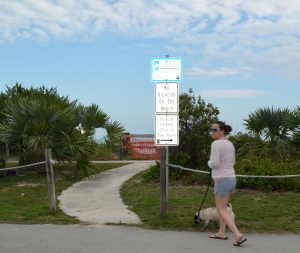 Chickens on the side of the road!  They are EVERYWHERE!  Running across the road and everything!  Note our “car” has no side doors or windows, or seat belts for that matter! It was awesome! 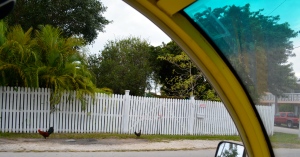 CSP gazing at the ocean. 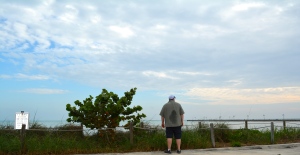 It was a gorgeous day! 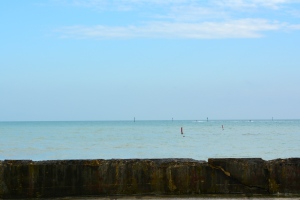 We even found a Starbucks!  Which was great because we needed to use the facilities and you can trust a Starbucks to be clean. We passed by the Hemingway house and the Southernmost Point but there’s NO parking in Key West and lines were long so we just waved and kept driving! Our rental time was coming to a close so we had Tropical Rentals drop us off at Sloppy Joe’s Bar.

CSP wanted to enjoy a beer in an open air bar so off we went! CSP got some conch fritters to go with his beer.  I thought I liked those but one bite reminded me I don’t!

I swear I took this picture just as we were toasting with our first drink!  CSP looks so drunk!!! 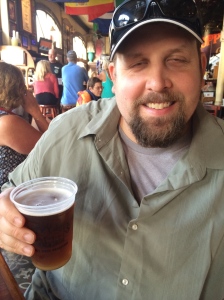 I had a coconut mojito.  So yum.

Sloppy Joe’s is pretty cool.  Very crowded, which surprised us being that it was a Monday and all.  While we were there this awesome family band called the Doerfels played.  LOVED them.  Lots of bluegrass. 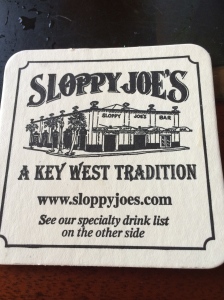 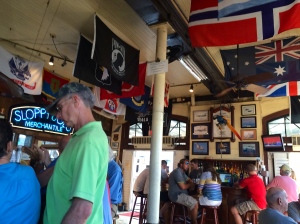 When we were finished we bought CSP a Sloppy Joe’s t-shirt in the gift shop then stepped outside to wave to CSP’s mom and the pugs!  They were watching us on the Duval Street webcam!  It was so cool!

Isn’t she a beauty??  We are usually on the ship when it’s all lit up at night so it was a real treat to get to photograph it all aglow!  We got on the ship around 7 and found out there were only 15 more people out on the island that we were waiting for!  Glad we left when we did!  We went to our room to shower and dress for dinner.

Dinner tonight was at Lumiere’s.  On the way in we saw Stitch in the lobby.  He’s my favorite!  And there was no line!  But alas he was heading upstairs for a break so this is the best pic I could get.

We sat down at our corner table

and perused the menu. 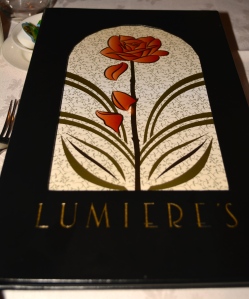 CSP was so excited to find escargot on the menu tonight!  He ordered that and the lobster & shrimp cocktail for his appetizer.

I ordered the Fried Brie. 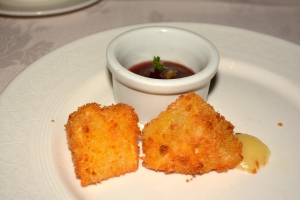 We both had delicious French Onion soup.  For his entree CSP chose the Baked Salmon Royal.  He loves anything with the word “royal” in it!

I ordered the Lobster Macaroni.  I’d always wanted to try that but haven’t seen it out anywhere.  I was confused when ravioli showed up instead.

But I thought maybe I read it wrong on the menu.  So I cut into it and it was brown.  Turns out it was a mushroom ravioli.  So we switched it out for the correct dish.

I was SO glad we did.  This was really delicious and creamy!

Desserts were creme brûlée for me

and a Mickey Bar for CSP!  Our waitstaff got a kick out of that!

On the way out of Lumiere’s we saw Tiana!  She is SO beautiful and her dress is amazing.

We went to Fathoms Lounge for Match Your Mate.  I love this “game show”.  It’s like a Disney version of the Newlywed Game but with a couple who’s just married, one who’s been married the longest in the room, and one in between.  It was great fun!  Fathoms is a cool themed lounge

with these jellyfish looking light fixtures. 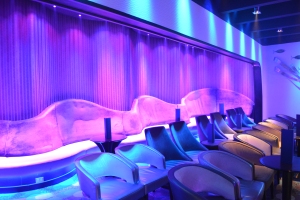 Back to the room to pick up our big cups then up to the drink station for beverages. By now people had started decorating their doors and putting out their Fish Extenders (more on that later).  I was so sad though because we couldn’t find our Fish Extender when we were packing for the cruise!  We’ve used it on 3 prior cruises and it just wasn’t anywhere to be found.  Plus it holds all our door magnets so we were feeling pretty bare!  Back to the room for the last time to plan for tomorrow and get a good night’s sleep!