We woke up to more cloudy skies and more rain!  But it wasn’t heavy and it did let up after breakfast.  We had our usual breakfast at the Windjammer buffet. We changed into our swim suits and spent the morning and early afternoon in the hot tubs and pool. Since it was raining off and on and since we’d all been to Nassau a few times we decided not to get off the ship.  This meant we had the hot tub and pools pretty much to ourselves.  Because we were in our suits we also had lunch at the Windjammer.  We didn’t want to dry off and change into real clothes just to change back into suits after lunch.   It was a laid back day.  We met Eric from Manhattan (shout out! Holla!) who works for Twitter.  He was fun.  We were all in the hot tub and I was curious if it was salt water so I had him taste it.  He thinks it’s fresh water, by the way.

After our afternoon nap we dressed for dinner and the show. 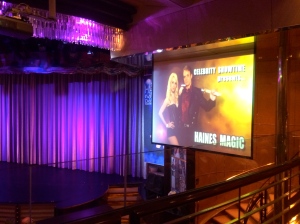 The show that night was a magic show by Haines Magic. It was really good!  Momo and I couldn’t get over how cheesy the magician spoke.  All full of dramatic pauses.  He’s the William Shatner of magic. 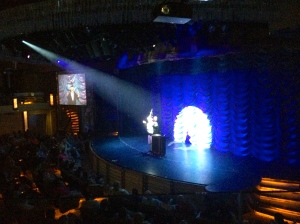 At one point he brought up a guy from the audience.  Chris!  He’s a little guy Momo and Sara met at Señor Frogs!  It was really cute.

Dinner was really good that night.  I had a baked feta and tomato salad.  I wish I’d gotten a picture of it.  I’d never thought to bake feta but it was awesome.  I also had the chilled pineapple and lychee soup.  My entree was the turkey breast with veggies. 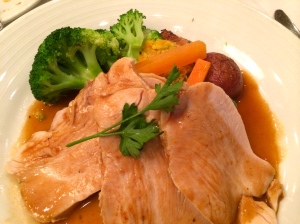 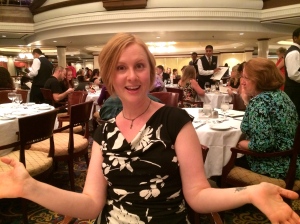 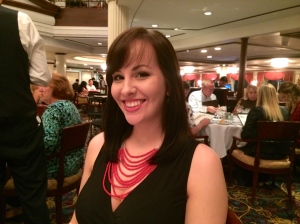 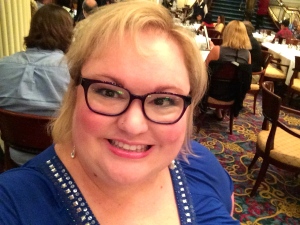 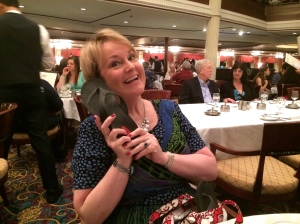 You may be asking yourself why is Gigi posing with a flip flop at the dinner table?  She picked up her flip flops in the cabin to move to the closet and just forgot to put them in the closet and brought them to dinner!

During dessert (I had the Key Lime pie) the waiters all sang O Sole Mio. 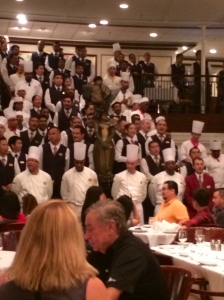 Clearly the man in the foreground of my picture is NOT impressed.

Our after dinner show was one of my favorite shows- the Love and Marriage Show. 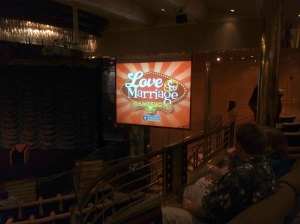 It has different names on different cruise lines (Disney is Match Your Mate) but the concept is the same and it is ALWAYS hilarious!  People are willing to do anything for a gift basket!  Here we are waiting for the show to start. 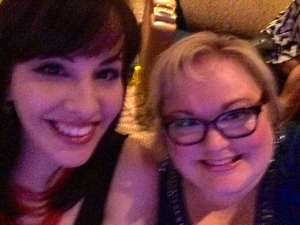 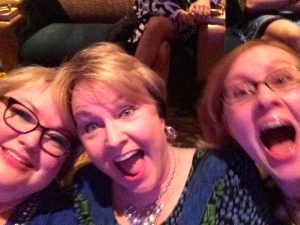 Trust me- you HAVE to see this show.  It’s modeled after the Newlywed Game with quiz show questions.  Couples have to audition to get up on stage then the men are taken off stage while the women answer questions.  Then they switch. Interestingly enough the questions were the same on this cruise as they were on my last Disney cruise!  But the answers are always crazy and men are just nuts! We laughed SO hard!

Once the show was over Sara and Momo wanted to go dance and Gigi wanted to stay in the theatre to see RIPD. 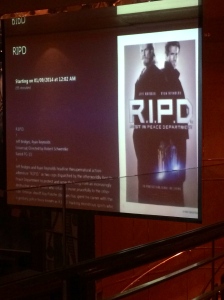 I stayed with Gigi.  I love my mother but I’d rather scoop out my own eyeballs than watch that movie again!  We made it back to our stateroom and hit the hay.