CSP wrecked his beloved truck a few weeks ago.   It’s a 2004 Chevy Silverado.  The cd player is broken but it runs great.  Our insurance covers a car rental and our body shop happens to also be a Hertz agency.  So they hooked us up with our rental car when we dropped off the injured truck, Q-Tip.

They gave us a 2014 Chevrolet Equinox.

Fully tricked out.  All the bells and whistles.  Leather seats, heated seats, sun roof, XM radio, back up camera, the works.  It even has lane assist so if you cross over the painted lines on the road it beeps at you.  Also if you get too close to the car in front of you it lights up and beeps at you.  CSP instantly named the car Simon, because Simon says you’re driving too close, etc.   If Hertz’s goal was to make CSP fall in love with the car, then they are clever, clever bastards because that’s exactly what happened.

I called CSP at work the other day and they said he was at lunch.  I called his mobile phone.  “Where are you?”  CSP- “Just sitting in the car”.   He swoons over this car.

We finally got the call that CSP’s truck is ready to be picked up tomorrow.  They are going to have to peel CSP away from Simon.  It’s true love.   Today I had a hair appointment.  My salon is over 30 miles away.  It’s a 65+ mile round trip (she’s fabulous and the price is right, even with gas).  So I drove Simon and CSP drove my car, Blanca, to work.  CSP said driving Blanca now is like driving a go cart.  She’s a Toyota RAV4 and she takes offense to that.  My phone beeped while I was at the salon, indicating I had a text message.  The following is the conversation I had with CSP via text: 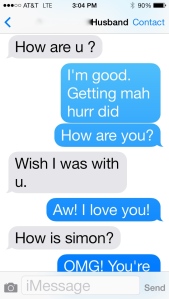 Notice how it starts out so sweet.  Aw!  He wishes he was with me!  But NO!  It’s Simon he really wished he was with!  He’s obsessed!  I mean, I get that it’s going to be hard going from 2014 spaceship on wheels to a 2004 truck that smells like coffee and farts, but come on!  He may need grief counseling after he trades Simon in tomorrow.  Pray for my husband.