Sunday we woke up, had breakfast, and chatted some more.  I tell ya, the most fun we had was just sitting around catching up with everyone!  Just before noon we went over to Valle Crucis so everyone could see the Mast house and the Mast General Store.  It was raining so we decided to tour the house first.  GOOD THING.   Just as our home tour was wrapping up we heard a big noise.  We ran out to the porch and right in front of the store was a Toyota truck FLIPPED OVER! 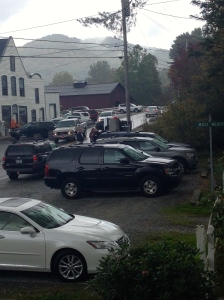 You can see the tail lights of the truck in the pic above.  See how there are cars parked just behind the truck?  Well there’s a red convertible you can’t see that the truck hit on it’s way to flipping over.

People immediately ran out from the store to help. 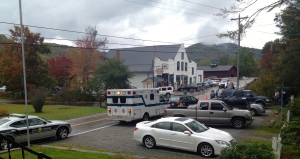 Next thing we knew there were all sorts of emergency workers there.  BUT before the workers could arrive the regular Joes helped pull the driver and passenger out of the truck while it was still on its side.  And there were 2 dogs in the truck too!  You should have heard the gasps as the dogs came out of the truck!  We were so worried they’d run out into traffic or just plain run off.  They were so scared!  But the truck people, let’s call them Katrina and Boyd, they had friends who were driving behind them who put the dogs into their car to be safe.  WHEW. 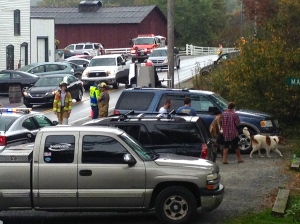 You can see one of the dogs in the pic above. 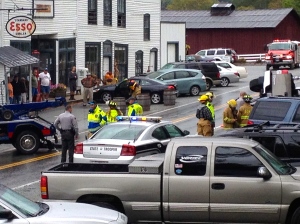 Finally the tow truck arrived.  By this time most of my group had gone over into the general store to shop.  I stayed watch on the porch and texted when the tow truck showed up.  That’s when my peeps started hanging out the windows of the store to watch!  I was so proud!   You can see some of the store looky lous in the pic above.  The whole tow truck procedure was a bit anti climatic.  I was thinking there’d be scraping metal and popping glass, real action.  But that tow man knew what he was doing.  He hooked up the truck and just winched it and all the sudden it was upright and driven off the road.  And the red convertible?  Only had a tail light broken!  Amazing!  Plus, everyone was fine- no injuries!  WHEW again!   Here’s a view from the store: 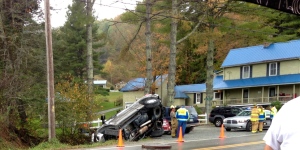 If you squint your eyes you can see me sitting on the porch in this pic!  SO, while everyone was shopping the rain came and went.  At one point Katrina and Boyd were standing down at the base of our porch.  I asked did they want to come up on the porch and get out of the rain but they declined.  Then Katrina asked could she use our restroom.  Of course!  That was my chance to get the scoop!  She came up on the porch and I asked if she was ok.  She said she was just scared more than anything.  Then she told me what happened. It started raining and she and Boyd had stuff in the bed of the truck they didn’t want to get wet.  So they pulled over.  But they didn’t see that there’s a creek there behind the telephone pole in the picture.  And the creek bed is all grown over with grass and such.  So when they came to a stop on the slick road they slid right into the creek!  And that’s when they flipped.  Katrina then went inside and used the restroom then skeedaddled back to Boyd pretty quickly.  I had more questions but it seemed rude to just yell them after her!

All my peeps came back and I told the story Katrina told me then it was time for us to go.  We stopped off at the Candy Barrel at the Mast Store Annex first for some candy. 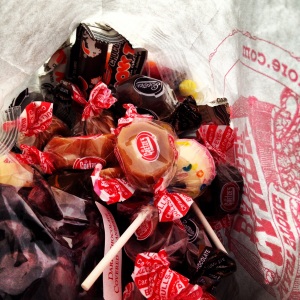 I picked up some of CSP’s favorite candies.

We went back to the house and played Phase 10 until it was time for a delicious dinner made by Kristie.  After dinner we played Cranium- the most fun game ever!  We laughed SO hard!   Just get Chris to hum for you and you’ll know why!

After Cranium we played a round of Scattergories.  So fun!  Then we Skyped with Chalica who couldn’t join us because she’s about to have a baby.  She’s in Colorado and it was so fun to see her while we chatted!    The whole crew huddled around the screen to see her and her baby bump!

After we said good bye to Chalica we spent some more time chatting and catching up with each other until it was time to go to bed.

Monday morning we got up early, got dressed and Leah, Pam, & I packed up our things.   We all went to downtown Blowing Rock for some shopping before it was time to go.  I had to get Leah back to Charlotte in time for her flight so we had to leave by 1 pm.  We gave our hugs, said our goodbyes, managed not to tear up and hit the road home for Charlotte!  We made great time coming down the mountain and I got Leah to the airport with plenty of time to spare.  We had a wonderful weekend and can’t wait to be able to do it again!