One of the highlights of the cruise- Disney‘s private island Castaway Cay!   But before we get to that, I forgot to show you our towel animal from last night! 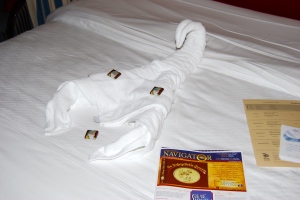 So, on Friday we woke up early and had breakfast at Cabanas buffet again.  We had already changed into our swim shirts and swim suits so after breakfast we went straight to the gangway to go ashore.  We should have put our sunscreen on in the room, but I thought- there’s always time for sunscreen.  That was a mistake!  By the way, I HIGHLY recommend swim shirts/rash guards for every member of the family.  I’m very fair and my swim shirt really protects me from the sun, but because it’s sort of like a swim suit it doesn’t get weighed down by the water like a regular tshirt would.

Big Bear is ready to go!

Waiting for the tram is a great opportunity to take a nice picture of the ship.  She’s a beauty!

We took the tram

the adult beach.  Tip- go early or you’ll be hoofing it to the far end of the beach to find your chairs.  There are plenty of chairs and umbrellas.  We found a great, shaded spot under the 4th yellow umbrella. 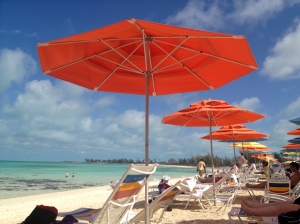 The view from my chair.

We were reading our books when we spotted the dashing Captain Jack Sparrow wandering down the beach. 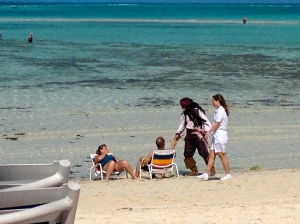 Who knows where he came from!

He has the swagger of a pirate down pat!

After a few hours of lounging it was time for lunch.  Even though the map of Castaway Cay shows Cookie’s BBQ & Cookie’s Too, they also provide lunch just off the adult beach next to the bar.  It’s a buffet with burgers, hot dogs, mahi mahi, ribs, lots of sides, lots of wonderful fresh cut fruit, and even a couple of ice cream machines!

After lunch was another good time to put on sunscreen.  But by now I was ready to get in the water and that was the only thing on my mind. We were being entertained by some pelicans down the beach.  They were so fun to watch as they swooped through the air then slammed into the water to get their fish.  Not the most graceful of divers- they look like they are about to break their necks when they hit the water!  I couldn’t get the best picture of them because the only cameras I brought with me were my iPhone and the underwater camera.  But see that splash?  That’s a pelican. 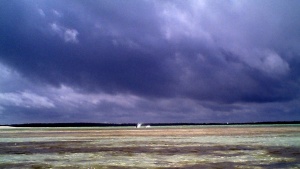 As you can tell from the pictures, it was a fairly overcast day.  It was still nice and warm and the water was very cool, but once you got used to it it was just fine.   My view of the beach from the water: 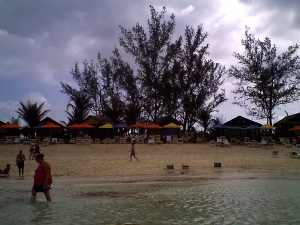 See the building there between the umbrellas?  That’s where the restrooms, bar, and buffet are located.  Just steps away from paradise!

CSP came out in the water with me. 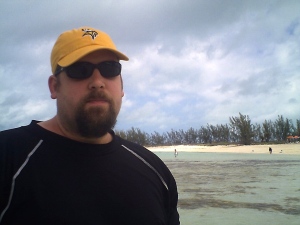 The water is quite shallow for a looooong way out at Serenity Bay.  That’s the only thing I’d change about it if I could.  I wish it were more of a traditional beach where you can walk out like 50 yards and get to chest high water.  Plus it’s very rough on your feet.  Rocks? Coral?  Something.  But I suppose it’s good that Disney didn’t go in there and just tear stuff up too.  Regardless we still enjoy it very much.

And there’s the start of a VERY red forehead.  Here are some of the little tiny fish that were all around us in the water.

You can see how shallow the water was right there.  Only a couple feet deep.

After we dried off we went back to the ship.  We had to get back in time for CSP’s 4:30 beer tasting.  I snapped a couple more pictures of the ship on the way back.

Here you can see Dumbo on the back of the ship painting the logo, just under the flag.  Click to enlarge.

And look who we ran into just outside the ship!  Stitch! 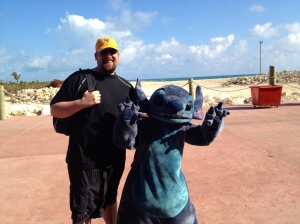 CSP jumped right in the short line to get a picture with him.   You can see how far out the AquaDuck juts out over the side of the ship. 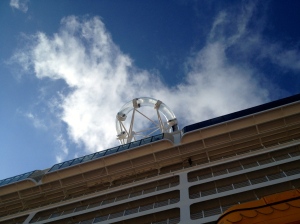 When we boarded the ship we had just enough time for CSP to ride the AquaDuck.  The line wasn’t all that long because people were still on Castaway Cay.  He was so excited!

The part you see in the video is when he passed Donald’s pool and Mickey’s Pool.  He especially loved going through the tunnels where the lights were all on.  Fun!

Next up….Beers from around the world and our final dinner!