Today we decided to switch things up a bit and try breakfast in Cabanas instead of Royal Court.  Cabanas is the buffet on deck 11.  Breakfast there was really good- tons of choices.

After breakfast we walked around the ship a bit.  We came upon the free ice cream station- it was closed so it was a good time to take a picture of Mike.

Near there is a poster of the Fantasy announcing the inaugural sailings.

So cool that we were able to be a part of that!

Then we went to D Lounge for Bingo!

This was CSP’s big concession for me.  He loathes bingo but sits through it for me.

Plus, unless you win, you’re basically throwing money away in his opinion, which I suppose is true but it’s so fun for me!  This time I splurged  and got the bingo machine instead of the paper cards. 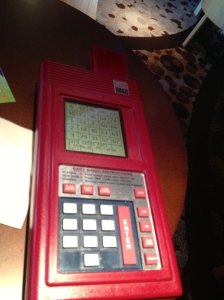 That was a cool experience. The machine does all the work for you which seriously cuts down on the stress factor.  They say you have higher odds of winning with the machine.  We didn’t win anything.  But we did get two free Disney calendars for attending!  Fun!

We walked around the ship some more after bingo and then went to lunch at Royal Court at 1:30.  CSP had calamari for his appetizer.

I had the fruit timbale.

I asked what does timbale mean and they said “stack”.  So I had the fruit stack.  For our soups I had the chilled raspberry soup. 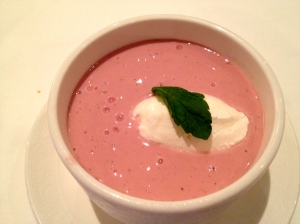 So yum!  CSP had mulligatawny for his soup.

Neither one of us had ever had it, but I remembered the name from Seinfeld‘s Soup Nazi episode so I was really interested in it.  CSP loved it!  He wants to try and make it at home.

For our entrees CSP had the mahi mahi sandwich.

He asked for fries instead of chips but they brought him both.  I chose the pork tenderloin.

Both were really good.

Dessert for me was a raspberry creme brûlée

and for CSP it was a

lemon cheesecake.  We both enjoyed them.  Creme brulee is another dish I try and get as much as possible on the cruise.  It’s not something I can whip up at home.  It would involve a blow torch and as you may remember I’m married to Cap’n Safety Pants.  He is not crazy about me playing with fire.

We finished lunch at 2:25 and went and got in line for the Galley Tour.  This tour is not advertised (that I could find) in the Navigator so you have to just know to sign up for it.  It’s free and really interesting.  CSP especially loved it.  He was amazed at the size of the equipment.  I was amazed at how incredibly clean everything was.  I mean, we had JUST finished lunch in that restaurant and yet you’d never know it, the kitchen was so spotless and gleaming!

You know in your head that the facilities must be big to feed that many people, but to see the ginormous soup kettles

is a whole nother thing.  It’s amazing.  Check out this giant immersion blender! 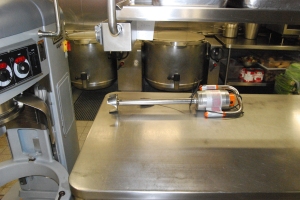 It’s like an outboard motor!  Here’s the big mixer:

One of the giant dishwashers:

Chef Darin was really informative and showed CSP the inside of the big walk in freezer but he made CSP promise not to take a picture inside.  Disney secrets and all.   These are the coolers where they put the desserts.

This big white board is where the servers come in and write up how many people are ordering what.  Interesting- I thought it would all be computerized.  Secret crew staircase! 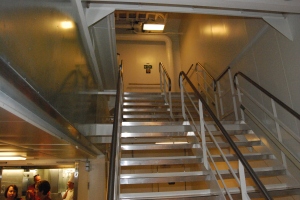 around the dining room.

I love how the little lights are carriages.

Then we went back to our cabin to take a nap.  On our way back to the cabin we saw Remy.

Then we took advantage of an empty guest services area to snap CSP’s picture in the King’s throne.

When I woke up from our nap I put together my Fish Extender gifts.  A Fish Extender is a pocketed organizer thing that hangs from the Fish or Seahorse outside your stateroom door. This is ours. 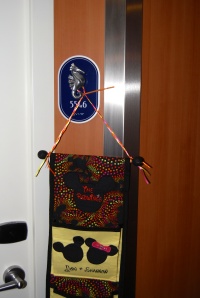 You can make your own or have one made for you (shop Etsy or Ebay for those).  You sign up for the exchange on the DISboards.    DISboards are online message boards for Disney enthusiasts.  FULL of info and a great place to get schooled before your Disney trip or cruise.  There is a thread for each cruise sailing.  You join your thread and someone in the group will coordinate the Fish Extender exchange.  You tell that person how many people in your travel party, your names, ages, if you’re celebrating anything, etc.  Then just before you leave on your trip you print out or write down everyone’s stateroom numbers.  At some point during your trip you go around and deliver your presents.  You don’t have to spend a ton of $$.  Most people give Disney themed items or cruise themed items or items that are representative of their hometown.  Like Canadian people gave us a Canadian notepad and pencil and maple candy.  Cute!  Since we are from the Carolinas and the Carolinas are famous for barbecue we go to Shealy’s BBQ and pick up tiny bottles of freshly jarred barbecue sauce every year.

Then I pair that with a Thirty One item.  This year it was Thirty One luggage tags.

I bag them up in a cute bag: 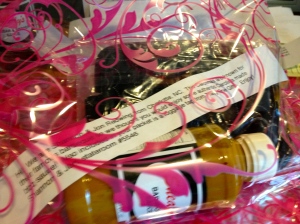 The finished gifts all ready to go: 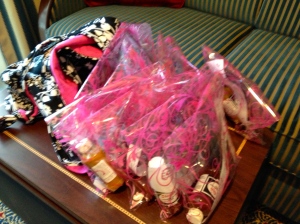 I used my new Thirty One Inside Out bag for delivering the FE gifts.

Next up….Believe and a surprise dinner!