We woke up early again (no small feat for us night owls) and had breakfast at Royal Court.  It’s the same menu every day so no pictures today.   Today was the day when the cruise started going by too fast. We debated going ashore in Cozumel but ultimately it came down to that CSP still wasn’t feeling up to it.  So we stayed on the ship.  He did say though that next year he’ll get off the ship in Cozumel.

After breakfast we changed into our swimsuits.  Before hitting the pool deck though, I had an appointment at 11 am for a quick polish change at the spa/salon.  My gel manicure I got at home before we left was all sorts of chipped up.  CSP decided he would take that time and run around the ship taking pictures of the ship

Well, my simple polish change turned into a Shellac manicure

with a gorgeous view of the sea and before I knew it an hour had gone by. By the way, I finally soaked off my Shellac manicure today only because it had grown out so much and I was ready for a color change.  I only had a couple small chips in it and some tip wear.  Why can’t I get that good of a gel/Shellac manicure in my hometown?  The same thing happened to me on the cruise last year!  But I digress.

For lunch we decided to try the buffet at Cabanas.  CSP loved it but I wasn’t crazy about it.  I’m just not a fan of buffets overall though.  For a buffet it was good.  LOTS of choices.  They did have big cocktail shrimp and I love that.  After lunch it was time for a good nap!

We woke up and put our swimsuits back on and headed up to Satellite Falls, an adult area on the ship. 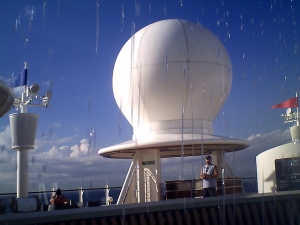 We took our books and chilled out there all afternoon.

There was plenty of shade for my fair, white self

and the Satellite Falls themselves were fabulous.

I took the waterproof camera and took some pictures from under the falls.

It’s so relaxing there.  The falling water provides the white noise and the water is just deep enough

where you can lounge in it.

The center of the falls has a circular seating area that’s heated!

So nice!  And it wasn’t crowded at all since it was a port day.

Before we knew it it was 5:30 and time to go back to the cabin to get ready for dinner at Palo!

Next up…Palo, Pirate Night, and Fireworks!