We started today, our second sea day,  by having brunch in Lumiere’s.

CSP started out with crab cocktail.

I don’t know how he can eat fish first thing in the morning!  He also had lox and bagels.  Then for his entree chose

sole with crawfish, scallops, and brown butter sauce.  I had eggs benedict with fruit.

After brunch we went to Rockin Bar D to play bingo.

It was fun but we didn’t win.

We went out for a walk around the ship then back to our cabin for a nap.  About the naps…We have a schedule on cruises.  We stay up late, get up early for breakfast, run around during the day, then take a nap during the hottest part of the day so we can do it all again!

Today we  had reservations for Palo for High Tea!

I was so excited!  I LOVE hot tea and all the traditions surrounding high tea.  CSP isn’t a tea boy so he got coffee.  But that’s ok.  He still enjoyed the rest of it.  Again we had a great view of the sea.

I went with our server Maria’s recommendation and chose the Chai Tea.

I love Chai and this was excellent.  First came the finger sandwiches.

The next part of high tea was the best part.  The scones. 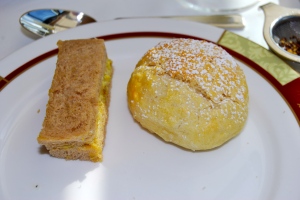 Sure, it looks unassuming, but OMG it was the best scone I’ve ever had.  They served it with Devonshire cream and strawberry preserves.  The cream was to die for.  If the entire tea was just a basket of scones with cream and jam I would have been very, very, happy.

Next up was dessert. 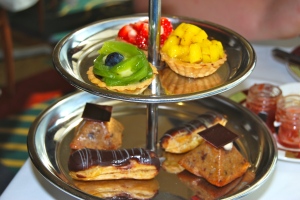 Fruit tarts, ginger cakes, and little coffee eclairs.  Then there was more!

Apparently the tarts and cakes weren’t dessert!  So they gave us a strawberry custard trifle.  Look on top and next to that chocolate square is a blueberry that is cut in half.  Can you imagine how hard it must be to cut a tiny little blueberry in half on a rolling ship?   We were very impressed.   As we were leaving Maria gave us a plate with tin foil on it.  We peeked inside and it was a plate full of fruit tarts!  So sweet!

CSP ran back to the room with the tart plate and we went to the future cruise booking desk.  While we waited we were able to get some good shots of the empty lobby.

I love how Disney decorated the ships in such a timeless Art Deco theme. 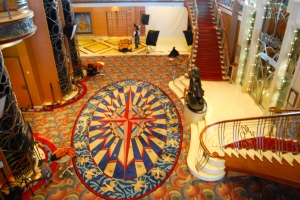 When it was our turn we booked our next cruise.  Next year we’re cruising on the Disney Dream!  So excited!

Then we went to the shops onboard and bought our souvenirs- a magnet and a Christmas ornament.  Afterwards we went back to our room to get ready for the show and dinner.  The show tonight was called “Villains Tonight!“.

It was really funny.  The shows onboard are amazing.  They do so much with pyrotechnics and elevators, you forget you’re on a ship!

After the show we went to Diversions for cocktails to wait for dinner.

CSP got the refillable beer mug at the start of the cruise so he got a beer.

I snuck some whipped cream vodka in my water bottle and added it to a ginger ale.  Diversions has a bunch of board games for people to play.  Pro tip:  playing Jenga on a ship that’s rocking and rolling is an exercise in futility.

Dinner tonight was at Lumiere’s.  CSP tried escargot for the first time and…

…loved it!  My appetizer was Lisa’s favorite…

while I had the beef tenderloin.

For dessert I chose the creme brulee 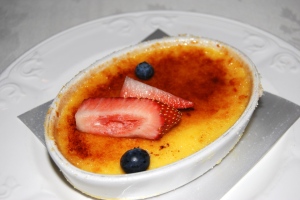 & a praline.   Dinner itself was wonderful but the atmosphere was horrible.  We had the late seating for dinner- 8:15pm.  Dinner often ran until past 10pm.  The problem tonight was screaming babies.  I felt sorry for the family who kept taking the child out of the dining room when he would cry.  But the other table near us?  The table where the parents clearly had given up and didn’t even acknowledge their screaming child?  We did NOT feel sorry for them.

After dinner we went up on deck and watched some of the movie Hercules on the big screen- Funnel Vision.  Once that was over we went back to the room, greeted our towel animal 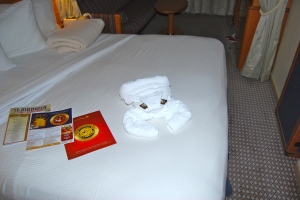 and watched Puss in Boots.  Then, finally, it was time for bed!