Last night my friend Christina and I went out for a bite of dinner.  She had suggested TGIFridays so we went in and put our name down.  We knew something was up right away.  There was a white, residential floor fan out in the waiting area.  On.  And it wasn’t doing much good.  When we put our name down I asked what the deal was and the A/C was out.  In June.  In Charlotte.  It was over 90* that day.  We thought maybe it would be better once we were seated.  It wasn’t better.  We didn’t know what to do but we knew we couldn’t stay there.  We left a note and skeedaddled!

We went across the street to a new restaurant called Tavern at the Mills.  The space was nice and the menu was extensive and looked good.  Our waitress was sweet as pie and gushed over just about every item on the menu so we were excited when we placed our order.  Christina ordered a pulled pork barbeque sandwich and a side of the much heralded mac and cheese.  I ordered a chicken cheese steak sandwich with a side of mac and cheese.  Now, we are Southern and we expect mac and cheese to look like this when ordered in a restaurant.

Note the browned cheese on top.  We were told the mac and cheese would arrive in its own little ramekin.   We were very excited!  What arrived at our table looked more like this: 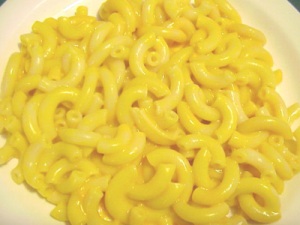 But worse. Bright, safety orange cheese sauce and overcooked, mushy noodles.  Horrible.  And for $4!  The waitress came over and noticed we weren’t eating it so she said she would remove it from our ticket.  A little while later the owner came over and asked about the mac and cheese.  We explained what we had expected vs what we received.  You won’t believe it, but he started arguing with us!  Made it seem like we were picky divas or something when I wouldn’t serve that mac and cheese to 2nd graders!  While he was there he asked about the rest of our food.  Since he was ever so accommodating about the mac and cheese I let him know I was disappointed with my cheese steak.  I had expected a chicked cheese steak that looked like this:

or something close to it.  What came out was a chicken, cheese sauce, mushroom mixture (that was actually quite tasty) served on toasted white bread like you have at breakfast!   Pitiful white bread can’t handle chicken cheese steak! I couldn’t pick it up!  The bread just couldn’t handle it.  So I very politely conveyed that information to the owner who ARGUED WITH ME AGAIN!!!  I couldn’t believe it!  He’s only been open a month!  Shouldn’t he be a bit more gracious?  He said “Well, the cheese steak is listed under the Melts section like the patty melt so that’s why it comes on Texas toast.”  Ok, see, I’ve had Texas toast.  It’s like an inch thick.  This was kitchen white bread.  And I don’t care if you list a taco salad under the Melts section, it should still slightly resemble a taco salad!  I’m all for culinary imagination, but do your customers a favor and describe what you’re serving me on your menu.  AND he didn’t even offer us a free dessert or anything!  On the way out he tried to give us these pitiful 15% off coupons FOR NEXT TIME.  Yeah, don’t hold your breath.