We woke up and got breakfast at the Windjammer buffet again.  I wasn’t feeling all that great so after breakfast I laid down for a quick nap.  Then it was pool time!  We went into the adults only pool area, the Solarium.  It’s really pretty.

It’s all enclosed so the on and off rain didn’t bother us in there.  Also, I didn’t get sunburned so that was awesome. 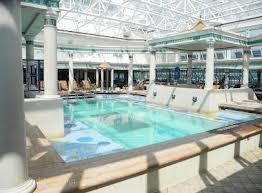 The only downside to the Solarium pool was the water was REALLY warm.  So it wasn’t very refreshing.  But it was nice to hang out in there.  There’s a cafe and drink station plus a bar so everything you need right there!

We read and swam and hung out at the pool all day.  Lunch at Windjammer again. Then more pool time.  Then it was time for our afternoon nap and to get ready for our last dinner on the ship. My appetizer was aroncini (rice balls)

My salad was the classic caprese salad.

For my entree I chose the Garlic Tiger Shrimp.

This was the only entree I was really disappointed in.  I mean, once I got rid of that suspect green stuff on top of the rice and gave my asparagus and tomatoes to my mom, all I was left with were 4 shrimp and a little pile of rice.  They were good shrimp though once I peeled their little suits of armor off them.  Dessert for me was the creme brûlée again.

Once dinner was finished the servers came and sang Happy Birthday to Gigi.  I may have had a couple cocktails so that explains the Blair Witch effects.

All throughout dinner the ship was rocking and rolling and whatnot.  It was crazy.

After dinner we made our way to the Skylight lounge for the Quest gameshow.  We had to sit through some interesting karaoke before the show started. 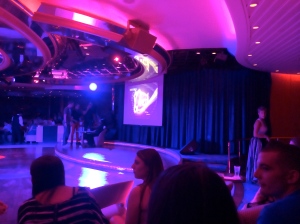 If you haven’t seen the Quest game show, you are seriously missing out.  This was our first time seeing it.  None of us knew what to expect.  The hosts came out and said “You’re about to see what people are willing to do for a keychain.”  I still didn’t expect the level of crazy that came out of these tourists!  The room was divided into 8 teams.  We were on team 2.  A male and female team captain were nominated.  Then it started.  It’s a scavenger hunt type show.   First the host would ask for things like a cell phone.  The first team to bring up a cell phone and show it to the host got the point.  Then the items needed got a little naughtier.  Like a thong.  Girls just ran up and lifted their dresses and showed their bottoms!  Then they said Male and Female team leaders- switch clothes!  OMG! People just started stripping right there!  We saw boobs and bottoms and all sorts of unmentionables!  By the end of the game most women in there were without a bra, most men had no pants on (still had on undies THANK GOODNESS), and the male team leads were dressed as women 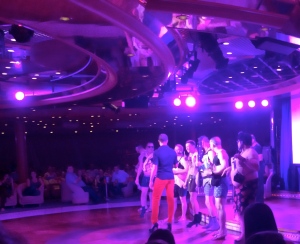 doing the can can!

Click pic to enlarge!  My throat was sore from squealing at the end of the night.  It was SO funny!  When the game was over one man still didn’t have pants!  They were all the way across the room! WILD!

We stumbled back to the room (the ship was seriously rocking and rolling) and packed our suitcases.  We tried to sleep but the ship was rocking so much that our closet door kept banging open!

Next up….debarkation and the road home.