Last night CSP & I went out to run some errands.  While we were out we had dinner then stopped at Bruster’s on the way home for dessert.  We went through the drive-thru.  You know how when you go through the drive thru and they just start handing you all the stuff back at once like you have octopus arms?  Well he did that and I dropped something and said “Oh shit!” then looked at him and said “Oh, I’m sorry!”  Cause I really don’t run around cursing in front of young men.  Or at all really.  He said “It’s OK Ma’am, I’m 18.”  Bahaha!!! 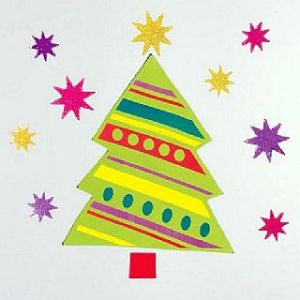 While I am anti Christmas songs pre-Thanksgiving, it is Christmas card list making time again!  Now, I can’t promise that I’ll actually be able to find my Christmas cards in the sea of boxes in the garage, take a cute Christmas themed pic of the pugs &/or us, and get my long list of Christmas cards filled out and mailed in time for them to arrive before 2011.  But I sure will try.  If you’d like to be on the receiving end of some of my paper based holiday cheer then be sure to email me with your address if I don’t have it.  hey shanny at gmail dot com.  No spaces.  If you aren’t sure if I have your current address then go ahead for safety’s sake and send it to me.  If I have not sent you my new address and you’d like it, please let me know.  I can’t believe Thanksgiving is next week already!  Then Christmas season will be here!  Help me prepare!  Don’t dilly or dally!

Con: Trying to remember the new address & phone number.  I just found out I have been giving out the wrong phone number for over a week!  Whoopsie!

Pro: No more carpet!  The new house has hardwood floors both up and downstairs.

Con: No more fingernails!  I was rocking good nails for a while but all that packing and moving and cleaning and now I have pitiful little stubs.

Pro: You realize you have too much stuff so you have a yard sale to get rid of some stuff and make some extra cash.

Saturday I had a yard sale.

Our new house is a little smaller than our old house.  We’re losing our eat in kitchen and our bonus room.  Funny though, the new house feels so much bigger and the space seems better planned.  Anyway, we had to do some serious paring down.

I tell ya, yard sales are hard work.  But it really does pay off.  CSP & I got up at the crrrrack of dawn to put everything out on the driveway.  We had for sale our red sofa, armchair, ottoman, coffee table, tv stand, farm dining room table, tv armoire, dresser with mirror, clothes/tv armoire, and 4 tables full of various other household items.  I made a few signs and put an ad on Craigslist.   Let me tell you how I saved money on my signs.  After an election all the signs are supposed to be taken down within a certain amount of time.  So I went around Tuesday night after the election and helped 5 of the candidates with their signs.  I wrote all the information on neon poster board then stapled my posters to the election signs.  Those things are great!  No worrying about if the tape you use will stick to the stop sign all night.  Zoe rode around with me when I placed my signs out late Friday night.

Saturday morning people started arriving EARLY.  Far too early for my tastes.  Gigi arrived to help me with the sale.  We had a lot of fun and were both really pleased with the results.  We got rid of everything that I wanted to and were only left with 2 boxes of things that I’ll donate.

Yard sale customers crack me up!  Here are some of the funny things that happened at my sale: 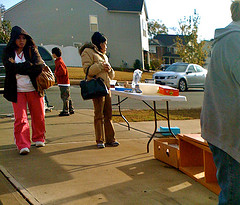 I am so pleased with how the sale went.  Some people are anti-yard sale but let me tell you, moving is expensive and it’s great to have some extra cash.  And it’s a great way to meet your neighbors.  One lady walked up eating a plate of cheese grits and eggs!